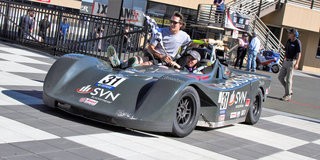 TOPEKA, Kan. (Nov. 12, 2018) -- While the Hoosier Racing Tire SCCA® Super Tour 2019 schedule has already been announced, let us take a moment before moving forward to fête the 2018 Hoosier Super Tour point champions from across 28 different classes.

There were several tight finishes in the Hoosier Super Tour point championship this year.  The Formula Enterprises 2 battle came down to a tie, with Thomas W. Burt and Rhett Barkau both earning 137 points.  However, Burt and his Bulldog Motorsport SCCA FE2 Mazda claimed the point championship based on his fifth-place finish at the Runoffs as compared to the eighth-place finish of Barkau.

The point championship battle was nearly as close in the Formula F (FF) class. There, David Livingston Jr., in a Spectrum 14H, eked out a win by one point over Yuven Sundaramoorthy’s Mygale. Jonathon Kotyk, the 2018 FF Runoffs winner who also drives a Mygale, finished third in the point championship only three points off Livingston.

Four points were the deciding factor in two Hoosier Super Tour class point championships. The Formula 1000 point champion in 2018 is Gary Hickman in his Edge Engineering Phoenix F1K.12 Suzuki.  Hickman compiled 75 points as compared to the 71 points of Jeremy Hill, in a Photon VD07, and the JDR F1000 of Nicholas Vardis.  And in Super Touring® Under (STU), Kevin Koelemeyer and his OPM/HPD/G-Loc/Hoosier Honda Civic grabbed the Hoosier Super Tour point championship by four points over Runoffs STU winner Kevin Boehm, also in a Honda Civic.

Only the top six regular-season finishes counted toward a driver’s 2018 point total.  Points were also awarded for a seventh and final race, the Runoffs. For each race, points were awarded to the top 20 finishers in each class.  Winners earned 25 points, and 21 points went to second.  Points were then doled out to others starting with 18 and descending to a single point for the 20th finisher.

The Sports Car Club of America®, Inc., founded in 1944, is a 67,500-member motorsports organization that incorporates all facets of autocross, rally and road racing at both Club and professional levels. With headquarters in Topeka, Kansas, the SCCA annually sanctions over 2,000 events through its 116 Regions and subsidiary divisions. In addition to series title sponsor Hoosier Racing Tire and Summit Racing Equipment’s support of the entire SCCA Road Racing program, much of the SCCA’s activities are made possible with support from the following Official Partners: Chevrolet, the Official Truck of the SCCA; Hawk Performance, the Official Brake Products of SCCA; Mobil 1, the Official Oil of SCCA; Sunoco, the Official Fuel of SCCA; and Tire Rack, the Official Tire Retailer of SCCA. To learn more, please visit www.scca.com.