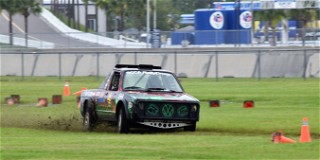 TOPEKA, Kan. (July 25, 2018) — SCCA’s Central Florida Region hosted the 2018 DirtFish SCCA® RallyCross® Dixie National Challenge, which took place July 20-22 at Sebring International Raceway in Florida. Attendance was strong with racers coming from 10 states, including one team that traveled 1,200 miles from Texas. While this was the Region’s eighth annual Dixie RallyCross, it was the first time the event fell under the DirtFish RallyCross National Challenge banner.

The Florida weather proved challenging with delays caused by lightning. But in true RallyCross form, the event soldiered on. Saturday was limited to three runs due to Mother Nature’s temper tantrums, but the organizers managed to squeeze in four runs on Sunday before more storms rolled in.

The course was set in an open space adjacent to Sebring’s Ulmann Straight and offered a quick pace through mostly loose turns and sweepers. Modified Rear-Wheel Drive cars had an exceptionally strong turnout with 14 racers competing in seven different marques. Modified All-Wheel Drive was the next largest class with nine Subarus competing for bragging rights. Cone counts played a significant hand in success over the weekend, with most class victors picking up very few or no penalties at all. Racers competed for custom trophies from Dynatorch and award ceremony door prizes ranged from small hand tools to a hydraulic floor jack.

The weekend marked the first RallyCross National Challenge appearance of the new “Constructors” class created for vehicles altered in excess of Modified Category allowances.  At Sebring, Constructors Two-Wheel Drive had two entrants, Leon Drake and Tom Suddard, who were dual-driving a Volkswagen pickup. Drake took first by just under four seconds, though he picked up eight cones to Suddard’s three in second place.

First and second in Stock Front-Wheel Drive went to Chris and Tim Ealer (respectively), in a Mazdaspeed3 with Donald Carl’s Audi A6 rounding out the top three.

Prepared Front-Wheel Drive had a close fight won by Jon Seaton, 13 seconds ahead of Amy Ebert, both competing in Ford Fiesta STs. Another Ford, this time a Focus, took third piloted by Tommy King who was another 20 seconds back.

Modified Front-Wheel Drive went to Alan Hoppe Jr. in a VW GTI, 12 seconds in front of Justin Nordine in his Fiesta. Carlos Filipe took third in his Peugeot 206, just under four seconds behind Nordine.

Stock All-Wheel Drive was a Subaru Impreza battle with first and second split by less than six seconds out on course. Charles Wright took first by nearly 12 seconds after Bryan Meeks picked up three cones.

Prepared All-Wheel Drive saw first go to odds-on favorite Bee Thao by nearly 15 seconds, with second to fourth separated by a little over five seconds of stage time. Christian Retterer took the runner-up position by under two seconds despite picking up three cones to Yaelle Olivier’s one cone in third place.

Modified All-Wheel Drive was a tight battle of Subarus with the first six competitors separated by just 24 seconds. Jason Fuller took an impressive win by ten seconds over Laurent Olivier. Ken Haun was just over six seconds back in third.

Stock Rear-Wheel Drive went to Adam Raymer in his Mazda Miata, even after picking up five cones. Logan Altmyer stayed clean, but still finished eight seconds out in second place.

Modified Rear-Wheel Drive had quite a bit of close competition with the first seven cars separated by just 30 seconds. Brianne Corn took first in her Mazda Miata by a convincing 21 seconds over John Maitland, also in a Miata. Third went to yet another Miata driven by Peter Dozeman who was less than five seconds back.