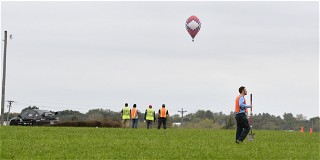 TOPEKA, Kan. (July 18, 2018) -- Looking ahead is important in every form of motorsport. And while the DirtFish SCCA® RallyCross National Challenge season is only about to begin, it’s already time for competitors to think ahead and prepare to register for the 2018 DirtFish RallyCross National Championship taking place Oct. 12-14 at the National Balloon Classic Memorial Balloon Field in Indianola, located just outside of Des Moines, Iowa.

Returning to Indianola after a visit to Kansas’ Heartland Park Topeka in 2017, online registration for the 2018 DirtFish RallyCross National Championship will open July 25 at 6 p.m. Central Time. A change from last year, registration will be open to ALL competitors at that time. There will be no staggered registration. Competitors also have the opportunity to purchase a commemorative shirt or hat from SCCA Gear during the registration process.

The 2018 DirtFish SCCA RallyCross National Championship begins Friday, October 12, with event check-in, class inspection and Tech.  Courses will be open to competitors for walking tours later in the day Friday, and a pay-per-run practice course will be available to drivers.

Again, there will be three unique course layouts over the weekend.  Runs are timed to 1/1000th of a second with missed “gates” resulting in a 10-second penalty.  Class winners are based on the total time of all runs Saturday and Sunday.