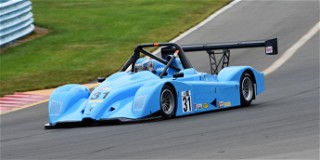 Spectators along the 3.4-mile, 11-turn circuit learned early in the day that races aren’t over until the checkered flag waves.  In Formula 1000, Jeremy Hill and his Photon VD07 looked strong after grabbing the lead early and establishing a solid gap back to fellow competitor Douglas Hertz.  Hill had things locked up in the 25-minute race right until his car dropped off the pace coming up the backstretch with only a couple laps remaining. Hertz inherited the lead at that point in his No. 13 Sunrise Solar Solutions Firman F1000 and went on to claim victory.

“About halfway through the race, I spun,” Hertz admitted. “I got back on, got flying, and here I am with a win.”

One fantastic fight emerged in the Prototype 2 (P2) class during late-morning racing.  There, it was Dennis Hanratty Jr. who had his West WR-1000 P2 car at the front for the first half of the race. But Armen Megregian, in his No. 31 Honda/GRP3 Motorsport Ligier JS 51, slowly reeled him in and grabbed the lead with about a half-dozen laps left.  However, Megregian could not shake Hanratty.  He’d get a strong run up through the Esses and into the Inner Loop, yet Hanratty would close in on Megregian’s rear-wing through The Boot portion of the course.  But Hanratty just didn’t quite have enough and Megregian brought home the win.

“I know I turned some fast laps catching Dennis, and he was generous enough to let me by just before the Bus Stop,” Megregian said. “From that point on, I was just hanging on. It was slippery for my car; and on the medium-speed corners, I’m tail-happy. So, he probably could see that and was licking his chops those last few laps. But I was happy to hold him off.”

A couple afternoon races also had come-from-behind winners.  In GT-3, James Ashe was in command driving a Mazda RX-7 for the first 10 laps.  But with two laps remaining, he faltered and Ken Nelson, in the No. 91 Nissan 200SX, got by on his way to victory -- but not without a fight.

“I think Jim must have had some mechanical problem because he slowed down a bit,” Nelson supposed after the race. “I was able to pass him on the back straight. But then he passed me back after The Toe of The Boot. I was able to get back past him … going up through the Esses. At that point, I was able to hold him off because of other traffic. It was a great race and I really enjoyed racing with Jim. He’s a great competitor.”

Then there was an exciting Touring 3 race that closed out Saturday’s competition. That event started with Nicole Jacque establishing herself out front in a Ford Mustang. But again, perseverance paid off -- this time for William Hendrix in the No. 101 AR Racing Nissan 350Z. With only about four laps to go, Hendrix caught Jacque, made the pass, and was first to reach the checkered flag.

“It was all about preserving the car and keeping the tires in good condition,” Hendrix said of his winning strategy. “Then, I just drove the best I could.”

Saturday ended with a lot of volunteers, drivers, friends and family gathering for the final All Participant party of the year. On Sunday morning, the final day of Hoosier Super Tour racing for 2018 will begin from Watkins Glen International. Follow all the action live at www.scca.com/live.