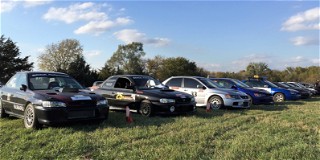 TOPEKA, Kan. (Oct. 24, 2017) -- It has been an absolutely amazing end of 2017 for the Sports Car Club of America®, with three national championship events setting records.  Totaled, there were more than 2,460 entries across four major events, and a handful of diehard enthusiasts competed in more than one championship.

The 11th annual DirtFish SCCA® RallyCross® National Championship, held Oct. 20-22 at Heartland Park Topeka in Kansas, is the latest event to break an entry record.  By the end of competition, 123 drivers had turned a wheel on one of three off-road courses.  This beats the previous RallyCross National Championship record of 109 competitors set in 2014 at I-80 Speedway in Greenwood, Nebraska.

This year’s Tire Rack SCCA Solo Nationals began the record-setting season back in early September at Lincoln Airpark in Nebraska with 1,319 drivers crossing the timing lights during the four-day event, making it one of the largest annual motorsport events anywhere in the world. The previous record was set in 2016 with 1,305 competitors taking to the tarmac.

Another premier SCCA event took place in September with nearly 60 entrants taking part in the United States Road Rally Challenge.  This year, the annual Road Rally championship was held in Alaska where competitors began their adventure by checking in to the Alaska Aviation Heritage Museum in Anchorage before heading south through the Kenai Peninsula to visit Seward and Homer while taking in 626 miles of stunning scenery.

Finally, SCCA Road Racing’s National Championship obliterated previous Runoffs® participation records.  This year’s event at Indianapolis Motor Speedway officially had 969 entries take to the famed circuit. That was 260 more than the previous record of 709 set in 2004 at Mid-Ohio Sports Car Course.  Additionally, the 2017 Runoffs reset the record for entrants in the first 24 hours that registration was open.  This year, 763 driver entries were registered on the first day -- demolishing the 413 entries made in 24 hours for the 2016 Runoffs at Mid-Ohio Sports Car Course.

Mike Cobb, SCCA President and CEO, said, “SCCA’s 2017 championship season has been one for the record books. Four incredible events drew thousands of SCCA members from across the nation to have fun with cars, and several hundred more members lent their time and expertise to make these SCCA activities memorable for a long time to come.  It says a lot about what the future holds for this Club and its members.”

Photo: Some of the cars that made up the record-breaking DirtFish RallyCross Championship event.