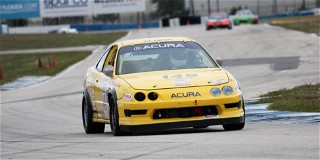 Spec Miata generated a lot of excitement this year in the Southeast Conference with 150 drivers participating during the season.  Alexander Bolanos and Selin Rollan both earned 170 championship points, and each grabbed three wins. But Bolanos became the SM Southeast Conference Champion based on three runner-up performances as compared to Rollan’s two second-place finishes.  Michael Carter came third in the standings only nine points behind.

A couple production classes also kept things interesting in this year’s conference championship.  In F Production, Michael Lewis and his Acura Integra took the championship by only one point over Ken Kannard driving a Mazda Miata.  Then in H Production, Leanna Wright and her Mini Cooper amassed 151 points during the season to beat the 150 points garnered by Ron Bartell driving an MG Midget.  Bartell won all six of his races, but Wright cobbled together finishes in a total of eight races.

Only six championship points covered the top four drivers in the GT-1 class. Zachary Monette, in a Jaguar XKR, emerged as the champion with 120 points.  Behind Monette were three Chevrolet Corvettes piloted by Simon Gregg, only two points behind in the championship; Juan Vento, just a single point behind Gregg, and then Paige Alexander.

There were also a couple tight open-wheel battles in the Southeast Conference.  Formula Enterprises driver Quinten Nelson, guiding a Formula Enterprises Mazda, won out over Paul Schneider by only three points.  Then in Formula Vee it was Donnie Isley, driving an Agitator 016, who claimed the conference win by just four points over Megan Gilkes in a BRD. Another four-point conference championship spread occurred in Touring 3 with Mark Kennedy and his Ford Mustang winning out over Todd Lamb driving a Mazda Global MX-5.

The conference began its racing season in early January with Round One and Round Two at Homestead-Miami Speedway. Next was a stop at Sebring International Raceway in Florida, an event which also was the opening weekend of competition for the Hoosier Racing Tire SCCA Super Tour.  The conference then rested in February before a second Hoosier Super Tour event in March at NOLA Motorsports Park in Louisiana.  Round Seven and Round Eight were held at Road Atlanta, followed by a third and final Southeast Conference Hoosier Super Tour weekend at VIRginia International Raceway.  Conference competition then took a break for two months before the season’s last two rounds in early July at Roebling Road Raceway in Georgia.