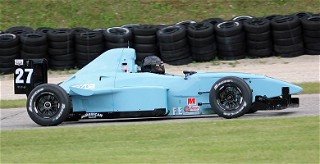 Formula Enterprises driver Dean Oppermann was first to the checkered flag in his class piloting the No. 27 SCCA Formula Enterprises Mazda.  He took the lead early in the race, but was chased to the end by Elliot Finlayson who took both FE wins at the Mid-Ohio Hoosier Super Tour stop two weeks ago.

“It’s my first June Sprints win, baby!” exclaimed Oppermann after the race.  “But it was far from a cakewalk.  I got a good start and was able to get into the lead going into turn one, but then got passed going into turn five by two people.  I got back by them in turn six, and the others began to mix it up amongst themselves and allowed me to get a little bit of a gap. I then just kept my head down to lengthen that gap as much as I could.”

A tremendous Formula F race Saturday ended up producing multiple firsts.  Robert Megennis was strong and held the lead for most of the race, but was hounded the entire time by David Livingston Jr., Andrew Bujdoso and Robert Perona.  The four duked it out the last few laps with various drivers claiming the top spot from one corner to the next.  On the final lap, Megennis’ car pulled to the side and Livingston stormed on to cross beneath the checkered flag first.  However, Livingston was penalized one finishing position after the race, leaving Bujdoso as the winner in his No. 7 Mygale 1600 vessel.  Thus, Bujdoso claimed his first FF win in his first Hoosier Super Tour start, which also happened to be his first ever race with the Sports Car Club of America®.

Another amazing race with a surprise ending took place within the Prototype 1 class Saturday. Jason Miller leapt to the lead in his WynnFurst, but fell out of the race six laps later. David Locke inherited the lead, but couldn’t hold on as the race neared its conclusion.  Tim Day Jr. moved to the front with Jim Devenport’s Norma M20FC right on his tail.  But Day in his No. 81 TJR Motorsports Stohr WF-1 held on for the win.

“It was a tough race,” Day said. “Locke was braking really early and I finally caught him coming into Canada Corner, and Devenport came through with me.  But I was able to hold on from there. It was a great race.”

The Spec Racer Ford Gen3 event was another race where the winner remained in doubt until the very last corner.  A foursome consisting of Brian Schofield, Scott Rettich, John Black and Bobby Sak formed a lead pack at the front of the field and battled almost the whole race.  From one lap to the next, one corner to another, the top spot was swapped between the four competitors.  On the last lap, with Schofield leading, the pack encountered traffic.  This allowed Black and Rettich to claim the first two positions with only a few corners remaining.  The duo went side-by-side through the last turn, which actually slowed them up enough for Sak to get a solid launch onto the main straight in his No. 19 Elite Autosport/Revolution10 Breaks SRF3 and beat everyone to the finish line for the win.

“I was fourth starting the last lap and thought ‘well, the win is probably not going to happen today,’” Sak said. “But then Schofield was leading when we caught a lapped car going into the Kink, the worst possible place. I had a massive run and was able to get by Schofield.  Black and Rettich were side by side through the last two corners. I late apexed, darted down to the inside, and we went three-wide up the straight. Schofield was kind enough to push me to the win.”

Sunday presents another Hoosier Super Tour competition day at the WeatherTech Chicago Region June Sprints from Road America with 13-lap morning and afternoon races, and a 15-lap event for Group 8’s afternoon race. Follow all the action live at www.scca.com/live.