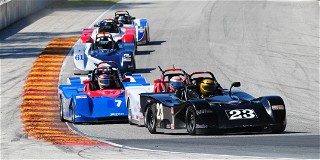 Storylines/Things to Watch:
62nd WeatherTech® Chicago Region June Sprints – Road America opened its gates for the first time in September of 1955, and the first race run was an SCCA National race. The summer of 1956 marked the first full season of racing at Road America, and it included the Chicago Region June Sprints. That first running of the June Sprints was part of the SCCA National Sports Car Championship, a series that determined the SCCA Champions prior to the now-familiar Runoffs. The June Sprints has been held every year at Road America since 1956, possibly making it the longest consecutively held road race in America.

A 500-Person Party – With 350 competitors expected, and another 200 volunteers registered, more than 500 SCCA members will be on hand this weekend at Road America to make the WeatherTech Chicago Region June Sprints an exciting success, which has become the hallmark of Hoosier Racing Tire SCCA® Super Tour events. SCCA is a membership organization and, as such, utilizes volunteers to put on events. These people organize, register, score, officiate and work flag stations during race weekends. No event is possible without the help of selfless volunteers.

Healthy Fields -- With the June Sprints being such an iconic event, it’s no surprise that a few car classes this weekend have good-sized fields. Spec Miata rings in at nearly 60 entries. Spec Racer Ford and Spec Racer Ford Gen3 drivers have combined for a field of 75 cars. The Super Touring® Lite, Formula Enterprises and Formula Atlantic fields arrive with nearly 20 challengers a piece, and there are around 15 entries for both the Formula 500 and F Production classes.

One to Go -- This weekend’s WeatherTech Chicago Region June Sprints is the tenth of 11 Hoosier Super Tour events planned for this year. The final event takes place June 23-25 in New York at Watkins Glen International, a weekend hosted by the SCCA’s Finger Lakes Region. Each event includes two races for each car class for a total of 22 Hoosier Super Tour races this year. Competitors earn points toward the Hoosier Super Tour Nationwide Points Championship, and the series serves as a gateway to the SCCA National Championship Runoffs being held in 2017 at the iconic Indianapolis Motor Speedway.