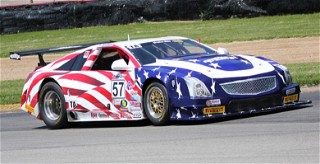 LEXINGTON, Ohio (June 3, 2017) – The first day of Hoosier Racing Tire SCCA® Super Tour competition hosted by the SCCA’s Ohio Valley Region at Mid-Ohio Sports Car Course saw several seesaw battles across the 27 racecar classes competing this weekend.  Nearly each of the afternoon’s seven race groups birthed a battle that left spectators wondering until closing laps which skilled driver would walk away with a hard-earned victory in the 25-minute races

The Spec Racer Ford Gen3 event was stacked with a field of drivers who have either won or nearly won SCCA National Championship Runoffs® titles, including defending champion John Black.  At the very beginning of the race, challengers went four-wide down the front straight into the first turn -- setting a standard for excitement that carried through the whole race.  Early on, Bobby Sak found himself in the lead with Scott Rettich, Black and Colin Kaminsky all in hot pursuit.

“The green came out, I was on the throttle, and the guys on the front row left enough room for me to split them,” Sak said about the SRF3 start.  “I had the corner, saw multi-colors in my rearview mirror, but decided I didn’t need to care about that and led the first few laps.”

Black, shuffled back to third, moved to second and fixed his gaze on the top spot.  Meanwhile, the handling on Sak’s car went away, which made him easy prey for Black who grabbed the lead and ultimately went on to win the race in his No. 17 CSR Performance SRF3.

“That start was definitely crazy,” Black admitted after the race.  “But I worked with Scott a little bit to catch up to Bobby.  Then I was getting out of the ‘Keyhole’ corner really well, getting on the gas super early, so I could get a good run down the straight and get by people.”

Powerful GT cars were next to take the course and they, too, put on one heck of a show.  The GT-3 class was hotly contested for a bit between Paul Young and Chad Bacon, with Young taking the win in his No. 79 Young Racing/Hoosier Tire Ford Probe over Bacon’s Toyota Celica.  But at the front of the field, top GT-1 drivers David Pintaric and Ryan McManus showed onlookers how to use traffic to the greatest advantage.

Pintaric took the lead early, but McManus in a Chevrolet Corvette gained the top spot by lap eight.  A few laps later, Pintaric found his way to the front again only to be overtaken again by McManus as the duo worked their way through other cars.  With only a handful of laps to go, Pintaric was again able to find his way past McManus and held on for the win in his No. 57 Kryderacing Cadillac CTS-V.

“In any race with multiple classes, you’ve got to deal with traffic,” Pintaric said.  “Ryan and I were patient, even went side-by-side twice and never touched.  It was a good race and a lot of fun being here at Mid-Ohio.”

While not what most competitive drivers set out to accomplish, the second-place finish didn’t at all dampen McManus’ spirit or enjoyment of the race.

“Dave has a really nice car and runs Trans Am full time.  When we can race with somebody like that, it’s a good measuring stick for us,” McManus said. “It was a great race.  It’s the best race I’ve been in for a few years and that’s why we came here to the Hoosier Super Tour. Tons of fun.”

Not to be outdone, cars that make up the Production classes continued the back-an-forth, fight-at-the-front theme for the day.  In F Production, Kevin Ruck endured a bad start to claw his way back for the win in the No. 73 Hoosier/Honda/Hawk/Hasport/SloMo Acura Integra.  And in GT-Lite, Kyle Disque in his Toyota Tercel persevered to take the lead from Ryan Kristoff midway through the race.

“We went through a lot of traffic,” Disque said about hunting down Kristoff.  “Ryan got slowed down working through traffic coming on to the front straight and I got around him there, but barely because we were all side-by-side coming into turn one.  But everyone kept it clean.  It was exciting.”

Unfortunately for Disque, Kristoff returned the favor while managing traffic later in the race and hung on in his No. 46 Facebook.com/RyanKristoffRacing/Gridlife /Eibach Honda CRX for a first-ever Hoosier Super Tour win.

“I pulled off to a good lead, but got blocked by a good B-Spec battle,” Kristoff said after the race. “I had to fight my way back and use traffic to pass Kyle the same way he passed me.  This was my first weekend with this car, first Hoosier Super Tour event, and first of what I hope will be many wins.”

Photo: David Pintaric, in a Cadillac CTS-V, on his way to a hard-fought GT-1 victory at the Mid-Ohio Hoosier Super Tour.