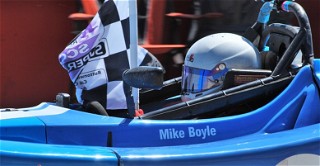 BUTTONWILLOW, Calif. (April 30, 2017) – A second day of racing at Buttonwillow Raceway Park Sunday marked the final of two Hoosier Racing Tire SCCA® Super Tour weekends held in California this year, the first taking place in March at Willow Springs International Raceway. This weekend’s visit to Buttonwillow was the Hoosier Super Tour’s seventh of 11 rounds, with two races for each car class at every event for a total of 22 Hoosier Super Tour races planned this year.

At the drop of the green flag, Miserendino launched into the lead.  That advantage, however, lasted for only one full lap.

“On the second lap, I was pushing a little too hard, a little too early coming onto the back straightaway.  When I hit the curb on the outside, it upset the car and spun me back into the infield,” Miserendino admitted.  “I take full blame for that. Nobody’s fault but my own.”

Black was following Miserendino on the track and said, “I didn’t even see that spin coming.  He went around so fast.  I was only about a car-length behind and thought I was going to T-bone him. But his car just kind of moved out of the way.  I got lucky on that one.”

Back to sixth fell Miserendino, and up to the lead went Black, followed by TJ Acker and Jack Willes.  After a handful of laps, Willes found himself securely in second place and began to challenge Black for the lead.  That challenge, however, slowed Willes and dropped him back into the clutches of Acker where the duo again contested the second spot.

Meanwhile, Miserendino had put his head down and was churning out fast laps.  He went from sixth to fifth, then up to fourth.  Soon, Miserendino joined the fight for second with Willes and Acker.

“I was just trying to get some redemption for my mistake and get back to the podium,” Miserendino said about the spirited drive.

By lap 13, Miserendino had earned the second position and set off to regain the top spot.  Black, the defending SRF3 SCCA Runoffs® national champion, saw Miserendino in his rearview mirrors.

“I looked back and saw Mike get by those guys,” Black said.  “I figured he must have been turning really hot laps.”

Black surmised Miserendino would probably catch him within five laps.  But, alas, there were only four laps left in the race and Black took the win in his No. 17 CSR Performance SRF3.  That was Black’s second SRF3 win for the weekend.

While an epic battle didn’t quite come to fruition in the SRF3 event, the Formula F race Sunday more than made up for it. Saturday winner Skip Streets hooked up with friendly rival Rick Payne, and the two of them put on an absolutely amazing show for 35 minutes.  Neither driver held the lead for more than a handful of laps in a row, and the top spot was frequently swapped a few times within a single lap.  In the end, Payne claimed a .205-second victory in his No. 75 Payton Pools/Redline Oil Van Diemen Honda.

“This is more gratifying than my Runoffs win two years ago,” Payne said.  “Once one guy got ahead, the other guy could follow and bear down. It was a fantastic race. A great time.”

Even though Streets finished second in a hard-fought session, he emerged from his open-cockpit car hooting and with an ear-to-ear grin.

“Rick and I were neck-and-neck all weekend,” Streets said afterwards. “It was a pleasure driving with him these two days. We had a blast. It was a phenomenal race. Good, clean, perfect racing.”

Several Sunday Hoosier Super Tour races kept onlookers in suspense as fans could never be completely sure if any driver had a lock on victory.  That was certainly the case in H Production.  Brian Linn, who won Saturday’s F Production race, made a few adjustments to his MG Midget and joined the HP battle Sunday.  At the start, the defending HP SCCA Runoffs national champion took the lead and built a substantial gap back to fellow competitor Jason Isley in second.  But on lap 11, he made a slight error in the back quarter of the track and spun his car into the dust, handing the top spot to Isley.  Linn tried to give chase, but Isley had good pace and went on to claim back-to-back HP wins this weekend in his No. 99 TRD/Hoosier/RACER.com Toyota Yaris.

“Brian kind of checked out, but he was within my vision,” Isley said about the first part of the race. “I was keeping an eye on him and just giving it all I got trying to keep up with him. He was really fast here all weekend long.  But something caught him up and I found him backwards.  I managed to get by there and had just enough gap to hold it to the end.  It was a pretty exciting race.”

Following an exciting weekend at Buttonwillow, The Hoosier Super Tour now moves north for the final West Coast event May 19-21 at Portland International Raceway in Oregon.  Follow all the action live at www.scca.com/live.