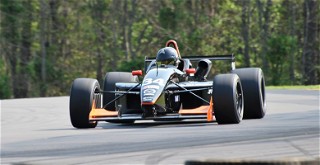 Michael Lavigne, winner of Saturday’s Touring 2 race, pulled out all the stops Sunday trying to claim another class win in his Ford Mustang GT.  When the green flag flew, Lavigne tore off into the lead and established a gap on Preston Calvert in second.  However, Calvert didn’t give up.  He hunted down Lavigne and managed to grab the lead as the T2 frontrunners worked their way through traffic a little more than halfway through the race.  But then it was Lavigne’s turn to apply the pressure and by lap 13 he was back in the lead.

The battle raged on in the closing laps.  Coming out of the final turn with only one lap to go, Lavigne pushed his car wide and off the track.  Grass and mud went airborne behind Lavigne’s car as he looked to have kept his foot on the throttle to pass a slower car and soldier on in an attempt to hold the lead.  At the same time, Calvert moved his car to the lower side of the track to pass the slower car and got by the off-roading Lavigne.  But the fight continued around VIR’s 18-turn, 3.27-mile circuit for one more lap until Calvert brought his No. 71 Phoenix Performance/Hoosier/Penske/Hawk Ford Mustang home for the victory.

“It was an incredible, back-and-forth race.  Mike Lavigne has a great car, he’s a great driver, and he has car control I can only dream of having,” Calvert said before picking up his winner’s trophy.  “Mike was ahead of me for most of the race, but I found a couple little opportunities to get by him -- by the skin of my teeth.  Finally, the only way I could get by was when he got stuck behind someone as we came up the main straight.”

Continuing the off-road theme, albeit not quite as drastic, was Sunday’s Super Touring® Lite contest.  Eric Kutil, driving a Honda Civic Si, grabbed the early lead with Saturday’s class winner, Nick Leverone, hot on his heels.  Leverone got by, however, after just a few laps.  But Kutil stuck with it and regained the lead again and held it for several more laps.  The two kept switching positions until the last half of the race when Kutil appeared to find some oil on the track and slipped off course.  That was all Leverone needed to bring his No. 37 Flatout Motorsports Mazda Miata in for another STL win this weekend.

“It was a really good battle,” Leverone said afterwards.  “Eric Kutil was super fast and I was having a hard time even keeping up with him.  We made several passes, and it was very clean racing.  My hat is off to him.”

Not to be outdone, the Super Touring® Under race was equally filled with drama. Saturday’s winner, Steve Eich, established himself at the front after only a couple laps.  But John Weisberg, driving a Mazda MX-5, stuck right with him.  The two swapped the top position several times over the course of the race until Weisberg went off course while negotiating traffic, which allowed Eich in his No. 93 Honda of America Racing Team Honda Civic Si to forge ahead for two STU wins this weekend.

“It was a tough one for sure,” Eich said about the race.  “I had a good battle with John Weisberg.  We traded the lead several times.  In the high-speed portions of the track, I was really good.  And John was really good in the low speed, tight turns.  John got ahead of me, but then we had some trouble with Touring 2 traffic.  I was able to get the lead from him then and hold on until the end.”

Another driver who triumphed during the weekend with double wins was GT-Lite’s Michael Kamalian in his No. 99 RevolutionSpeed.com Mazda Miata.  While Kamalian was fairly dominant in the class both days, notching convincing wins, his battle over adversity actually developed earlier in the week.

“We had bad luck at the shop this week. A bunch of stuff got stolen,” Kamalian said. “We had to thrash things together to get down for this race.  We borrowed wheels and everything.”

Sunday racing at VIRginia International Raceway concluded the sixth of 11 Hoosier Racing Tire SCCA Super Tour events planned this year.  Next on the schedule is a trip back to the West Coast for an April 29-30 weekend at Buttonwillow Raceway Park in Central California.  Follow all the action live at www.scca.com/live.