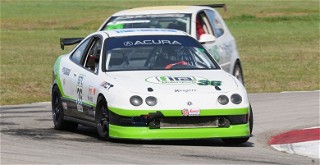 But it wasn’t just the local terrain that was rolling as several Hoosier Super Tour competitors have found themselves on a roll, too, when it comes to winning.  For starters, driver Michael Pettiford rolled to two class wins on a windy Saturday.  The first was in Touring 1 driving his No. 41 GO 4 IT Racing Schools/Hoosier Tires/Hawk Brakes/Emich Chevrolet/Forgeline Wheels/Phoenix Performance Chevrolet Corvette Z06, and the second in Touring 2 behind the wheel of his No. 41 GO 4 IT Racing Schools/Hoosier Tires/Hawk Brakes/Purifoy Chevrolet Pontiac Solstice.  Two wins is a pretty impressive feat unto itself, but achieving that in back-to-back races, in very different cars, is simply amazing.

“The Touring 1 race was pretty good.  We just stayed consistent and the Corvette did really well,” Pettiford said after taking his second victory.  “Hopping into the Solstice right afterward is a lot different.  It’s a turbocharged, four-cylinder compared to the Corvette’s big-block, V8 engine.  But the Solstice works really well.  It’s not the fastest, but nothing can out-corner a Solstice.”

Another driver showing some dominance right now is Formula Mazda ace Jarrett Voorhies.  He took his No. 15 360Fly/Drive2N2 Formula Mazda to a win Saturday for a third-straight victory, the previous two coming at the Circuit of the Americas Hoosier Super Tour weekend.

“I had the pole today, but just didn’t brake deep enough at the start into turn one and (Liam) Snyder was better than me,” Voorhies said. “I was a little bit surprised, but then followed him around for a while.  I ended up capitalizing on one of his mistakes, which is probably the only reason I got around him, and held on for the win."

Driver Richard Baldwin also claimed a win Saturday in his No. 25 Maximized Marketing/Baldwin Motors SCCA Enterprises Spec Racer Ford.  And while this win doesn’t represent a “streak,” it was his fourth of the Hoosier Super Tour season, placing him atop the SRF Nationwide Points Championship.

“This was my first time coming to Hallett Motor Racing Circuit and it was a blast,” Baldwin said after the race.  “Everybody should come to this race once.  It’s a really good time.”