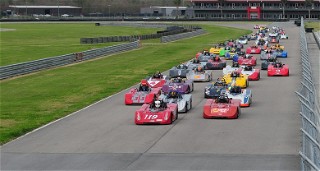 AVONDALE, La. (March 5, 2017) – New Orleans is well known as a place where people can have a good time, and that’s exactly what Sports Car Club of America® racers did Sunday during day two of Hoosier Racing Tire SCCA® Super Tour competition at NOLA Motorsports Park in Avondale, Louisiana, just southwest of N’awlins.

Admittedly, Touring 4 driver Darren Seltzer didn’t have such a good time Saturday as he fell victim to every competitor’s nightmare: he failed to appear on grid in time, which results in a driver starting at the rear of the field.  But Seltzer made up for it Sunday by taking the T4 win, a first-ever Hoosier Super Tour victory, in his No. 64 Oreca Gear/BFGoodrich/Race Keeper/G-Loc Brakes/Dynasty Racing Scion FRS.

“Saturday, I was busy wrenching under a car and missed grid,” Seltzer said.  “Today, we did much better.  We were on grid on time, had the fastest lap of the race in the class, and got a win here.”

The duo of Alexis and Ben Hocevar -- father and son GT-2 drivers from Madisonville, Louisiana, found just north of the Big Easy across Lake Pontchartrain -- had a good ol’ time competing against each other over the weekend at NOLA Motorsports Park.  Saturday, it was father Alexis who claimed victory.

“It was great, we had a lot of fun.  That’s what racing is all about.  And the best part about it is I beat my son,” Alexis said jokingly Saturday after winning in his No. 261 Howe Camaro.

But on Sunday, it was son Ben, in his No. 25 Chevrolet Corvette, who achieved redemption with a win in the GT-2 class.

“Man, we had a blast.  I think I had the better lap times over the two days, but he drove the heck out of his car,” a victorious Ben said Sunday about his father. “He was in my rearview mirror the whole time today.  And my shifter actually broke on the second-to-last lap.  But I made it through and finished with a win.”

Capping the good times Sunday was Spec Racer Ford Gen3 driver Grayson Strathman.  In the last race of the weekend, he held off Cliff White after a restart and took the win in his No. 19 Monster Energy SRF3.  During the victory lap, Strathman could be seen wildly waving the Hoosier Super Tour checkered flag over his head.  And when he pulled into victory lane, his fists were pumping in the air and you could hear loud hoots of glee emerging from the winner’s helmet.

“I managed to get out front and Cliff White was right on my tail the whole time,” a jubilant and breathless Strathman said after the race.  “I started to get a little bit of a gap, but then we got the full-course caution and the whole group came up back behind me.  They were battling me the whole time.  That was the best racing I bet you can find anywhere. It was so cool.”

There’s no rest for Hoosier Racing Tire SCCA Super Tour competitors as the series continues next weekend, March 11-12, on the West Coast at Willow Springs International Raceway in Rosamond, California, just north of Los Angeles.  Follow all the action live at www.scca.com/live.