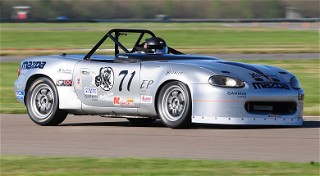 In the opening race of the day, F Production ace Ken Kannard, in his No. 51 Northwest Cable Construction/Hoosier Racing Tire Mazda Miata, maintained his winning ways.  His victory Saturday at NOLA Motorsports Park makes it three-for-three at Hoosier Super Tour events.  Kannard managed to win both FP races back in January during the series opener at Sebring International Raceway.

“It was interesting today with a lot of traffic.  I’m happy to get out of here with a win,” Kannard said about his day-one performance.

While Saturday’s weather started nice, the skies became overcast and the wind picked up a little later.  That, however, didn’t put the brakes on exciting racing.  In Spec Miata, more than 40 cars took the green flag.  The group at the front included names like Michael Carter, Selin Rollan, Justin Hille, Danny Steyn and more.  But it was Chris Haldeman in his No. 04 X-Factor Racing Mazda Miata who reached the finish line first with the race ending under yellow.

“I started on pole and had the early lead.  But Selin Rollan decided he wanted to come around and lead,” Haldeman said.  “He seemed to be making a couple little mistakes, so I decided to go back around him before things turned into a five-car race up front.  It worked out in my favor.”

To complete the first day of competition at NOLA Motorsports Park, the Spec Racer Gen3 and Spec Race Ford drivers took to the 16-turn, 2.75-mile circuit.  Things got off to a slow start as several cars ended up off track on the first lap and created a caution period.  But when racing resumed, things got wild.  Exiting the last corner on the last lap, three SRF3 cars were darting around for the lead.  Grayson Strathman was there, and Cliff White made an exciting move to an open space on the front straight.  Tray Ayres, however, held them off for the win in his No. 7 Ayres Racing SRF3.

“Cliff, myself and Strathman had an all-out battle the last four or five laps,” Ayres said. “This is a fun track.  There’s lots of high-speed turns.  Lots of flat, high-speed essess and high-speed sweepers. This track is really fast.”

A second day of Hoosier Super Tour competition from NOLA Motorsports Park begins Sunday at 11 a.m. local time with 18-lap or 35-minute races.  Follow all the action live at www.scca.com/live.