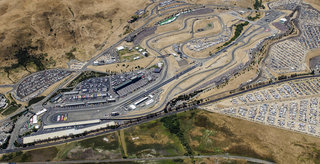 TOPEKA, Kan. (Jan. 26, 2017) -- The Sports Car Club of America® has officially announced that the 2018 SCCA® National Championship Runoffs® will be held October 16-21 at Sonoma Raceway in Sonoma, California.  It is the first time the Runoffs will be held at the Northern California track.

“We’re excited to have the Runoffs again head west, continuing the Board of Directors’ initiative to move the event around the country to iconic and challenging racetracks,” SCCA VP and COO Eric Prill said.  “With its deep heritage, dramatic setting and inspired layout, Sonoma Raceway is certainly right at home on the list of Runoffs host venues.”

About an hour’s drive north of San Francisco, Sonoma Raceway’s road course features more than 160 feet of elevation change. With track activity scheduled an average of 340 days a year, it is one of North America's most complete and versatile motorsports complexes and home to one of the nation's only high-performance automotive industrial parks with approximately 75 tenants. The facility’s first official event at then-Sears Point Raceway was an SCCA Enduro on Dec. 1, 1968.

"In 2018, Sonoma Raceway will kick off its 50th anniversary year and will be very proud to feature the premier event in amateur road racing as part of that celebration,” said Steve Page, president and general manager of Sonoma Raceway.  “We look forward to welcoming the SCCA community and the nation's best racers to the beautiful Sonoma Valley next year."

At the suggestion of participants, the 2018 Runoffs, including testing, qualifying and racing, will be shortened overall by two days from the 2015-2017 events.  Paved paddock space is limited, so additional lots around the track will be utilized.  A pre-reserved system for assigning paddock spots will be utilized just as it has been since the 2015 Runoffs at Daytona International Speedway.

Use of both the Carousel and Esses are expected, but the specific track layout has yet to be finalized for the 2018 Runoffs at Sonoma Raceway.  However, the venue is undoubtedly a fantastic site for both racing and spectating. The weather for October is traditionally pleasant, with average temperatures in the high 70s during the day and lows in the mid 40s.  Average rainfall for the month is a little over one inch.

While there is plenty to keep people entertained and busy at the track, the surrounding community is a well-known tourist destination.  The Sonoma County Tourism organization notes there are more than 425 wineries in the region, miles of rugged Pacific coastline and towering redwood forests. Sonoma County features premium wine, farm-to-table dining, unique resorts and spas, and over 50 state and regional parks.

The SCCA Runoffs has evolved into what is now commonly agreed to be the pinnacle of American motorsports.  Since 1964, the SCCA has crowned Club Racing National Champions at the winner-take-all, single race Runoffs format through dozens of separate races over three days.  As host of the 55th Runoffs in 2018, Sonoma Raceway will become the third California track to host the SCCA’s National Championship, joining Riverside International Raceway and Mazda Raceway Laguna Seca.

While the SCCA looks forward to the 2018 Runoffs at Sonoma Raceway, racers are currently eyeing the 2017 Runoffs to be held Sept. 25-Oct. 1 at Indianapolis Motor Speedway in Indiana.  The layout at Indianapolis will be an exciting 15-turn challenge running 2.592 miles in a clockwise direction. The configuration includes portions of the track previously utilized by Formula One for the U.S. Grand Prix and currently used by the Verizon IndyCar Series for the Grand Prix of Indianapolis.

About the Sports Car Club of America:
The Sports Car Club of America®, Inc., founded in 1944, is a 67,500-member motorsports organization that incorporates all facets of autocross, rally and road racing at both club and professional levels. With headquarters in Topeka, Kansas, the SCCA annually sanctions over 2,000 events through its 116 Regions and subsidiary divisions. Much of the SCCA’s activities are made possible with support from the following Official Partners: Chevrolet, the Official Truck of the SCCA; Hawk Performance, the Official Brake Products of SCCA; Mobil 1, the Official Oil of SCCA; Sunoco, the Official Fuel of SCCA; and Tire Rack, the Official Tire Retailer of SCCA. To learn more, please visit www.scca.com.