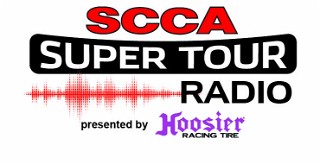 Topeka, Kan. (Jan. 10, 2017) -- When the first-ever Hoosier Racing Tire SCCA® Super Tour gets underway this weekend, Jan. 14-15, at Sebring International Raceway, all the action will be broadcast live Saturday and Sunday through the new Super Tour Radio presented by Hoosier Racing Tire.  The experienced team providing the race “call,” color commentary and on-air entertainment will be comprised of the three-man broadcast crew of Bob Steele, Mike Wolfe and Gregg Ginsberg.

“Super Tour Radio presented by Hoosier Racing Tire was created to provide consistent insight and entertainment heard at tracks, online at SCCA.com or over PMN’s network during Hoosier Super Tour race weekends,” Prill said.  “Bob, Mike and Gregg have done a great job developing the atmosphere at Summit Point, we just had to bring them aboard to cover the entire Hoosier Super Tour series this year.”

Steele is a veteran broadcaster with over 45 years on-air experience at stations from New York to Florida. He has called races at Summit Point Motorsports Park for the last five seasons and also provided color commentary for PMN's Southeast Super Truck Series coverage.  A longtime racer, Steele’s involvement with the SCCA dates back to the late 1970s with autocross.  Over the years, he has actively road raced in GT-Lite and claimed three back-to-back MARRS Championships in the class.

“Having a chance to delve into the SCCA’s premier amateur racing series, the Hoosier Super Tour, is an incredible opportunity,” Steele said.  “During the season, we’ll be keeping an eye on developing storylines and getting to know a lot more about the competitors that provide some of the most exciting amateur road racing in North America.”

Mike Wolfe has been practicing the art of radio for the last 20 years. The first 10 years of his career included work as a technician for Motor Racing Network coverage of NASCAR races. Stepping up to the on-air side of racing, Wolfe spent weekends during the ‘90s at Pocono International Raceway, Dover International Raceway, Indianapolis Motor Speedway and Richmond International Raceway interviewing some of the top drivers. He has called Southeast Super Truck Series races for PMN, and for the last three seasons announced live MARRS races.

Gregg Ginsberg has been part of PMN’s announcing team for the past three years, calling all the Washington D.C. Region races.  He has raced since 2003 and was named the Washington D.C. Region’s “Rookie of the Year.” Although he primarily drives in the MARRS series in an ITA Honda CRX, he competed at the 2010 Runoffs after having won multiple National races that year in Super Touring® Under. He's also found himself on the U.S. Majors Tour podium running in H Production, served on the D.C. Region’s Board of Directors and currently is a member of its Club Racing Committee.

Be sure to catch all of this year’s Hoosier Super Tour action at SCCA.com (www.scca.com/live) or Performance Motorsports Network with Super Tour Radio presented by Hoosier Racing Tire.