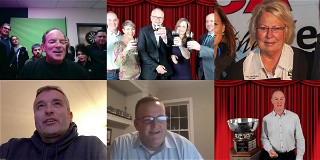 The 2023 SCCA National Convention kicked off on Thursday, Jan. 19, with the Club’s Annual Meeting followed by the presentation of several prestigious SCCA Road Racing awards.

Mechanic of the Year

Often unsung heroes of the sport, the Mechanic of the Year award recognizes the unseen but necessary efforts behind the scenes to keep a car running strong on the track. The award is chosen by the technical staff at SCCA and the Club Racing Board based on submissions to SCCA.com. The Mechanic of the Year award was presented to Northern New Jersey Region’s Carl Maffei.

A 30-year member of the Club, Maffei is well known and respected in the paddock for his work with Advantage Motorsports. One person nominating Maffei for this honor wrote: “Our mechanic is the glue that holds the team together. He's a non-stop workhorse. When everyone else is taking a break, he is hard at work. It's through his efforts at the track that ensures all the cars make every session on the track. Whether it's downloading data, helping out on the dyno, rebuilding brake systems, aligning the cars, or keeping the shop in order, he’s the man.”

An SCCA member since 1978 and a Steward since 1987, Heilicher has served in numerous Region and Division capacities through the years. As a Steward, she has contributed as a member of the Stewards Training & Development Committee since 2016, serving as its Chair since 2018. She helped create the SIT Training Manual now used by all SITs, and has worked tirelessly with the SCCA National Office to ensure the File Cabinet and Forms are current and up to date. Most recently she joined the Court of Appeals in 2022.

The John McGill Award is presented annually in recognition for significant contributions to the SCCA Road Racing program. The winner is chosen by the Club Racing Board and the head of the SCCA Road Racing department. This year’s honor went to San Francisco Region’s Tom McCarthy.

A longtime SCCA member and visionary behind Thunderhill Raceway Park, McCarthy joined the Club in 1963 and participated in his first drivers school the following year. He built and maintained his own cars, but also helped anyone in the paddock who needed it. McCarthy gave back to the San Francisco Region and SCCA with his time, considerable ideas, and boundless energy. He held many positions in the Club, being elected to the Region’s BoD and serving as the Region Executive. In 1988, McCarthy began pitching his vision for the San Francisco Region to build and run its own racetrack. This was a time in Northern California racing when tracks were closing, and dates were becoming more difficult and costly for the Club to secure. On Halloween weekend, 1993, Thunderhill Raceway Park – a track owned by San Francisco Region – held its first Region race.

Named after Jim Kimberly, former President and Governor of SCCA, the Kimberly Cup is awarded to the SCCA driver showing the most improvement in the last year. Selected by the Club Racing Board, this year’s Kimberly Cup recipient is Steve Introne from the New England Region.

Even after receiving his Regional competition license in 2003, Introne never stopped flagging. Coming from an SCCA family, the nearly 40-year member clinched the 2022 Northeast Conference Majors point standings in B-Spec and finished sixth in the Hoosier Super Tour point standings out of 70 drivers. In his fifth Runoffs appearance, he captured the B-Spec Tire Rack Pole at the 2022 Runoffs at VIRginia International Raceway, racing to a flag-to-flag victory.

Jim Fitzgerald Rookie of the Year

The Jim Fitzgerald Rookie of the Year award is presented to the SCCA Road Racing driver showing the greatest promise as evidenced by driving performance, selected by the Club Racing Board based on nominations submitted by the Executive Stewards. This year’s award goes to Washington DC Region’s Richard Hromin.

While Hromin has had his competition license for a few years, 2022 was his first season racing U.S. Majors Tour events, and it was his first trip to the National Championship Runoffs. His 2022 Runoffs performance included starting second in a field of 30 B-Spec cars, partnering up with the Tire Rack polesitter to stay in the lead pack. At the checker, he came up 0.078sec behind the winner.

The President’s Cup, originally presented by U.S. President Dwight Eisenhower and now presented by current and past SCCA presidents, recognizes the driver demonstrating ability, competitiveness, and success at the National Championship Runoffs. This year’s award, selected by the Stewards of the Meet, Runoffs Race Director, head of Road Racing, and the President of SCCA, goes to Kansas Region’s Jesse Prather.

2022 marked the 20th time Prather competed at the National Championship Runoffs; it also marked his fifth Runoffs pole, his eighth visit to the Runoffs podium, and his sixth Runoffs gold medal (making it three consecutive Runoffs wins in E Production). Prather’s current streak in E Production is well earned, too. Coming from an SCCA Road Racing family (his father Kent won the President’s Cup in 2005), Prather stepped out on his own with his prep shop, Jesse Prather Motorsports, quickly becoming one of the most notable race car builders in the Club. At the 2022 Runoffs, Prather engines swept the top six F Production grid positions and won the FP championship. And it doesn’t end there – in the Runoffs paddock, Prather could be found lending a helping hand to other racers whenever needed, marking the true spirit of SCCA racing.