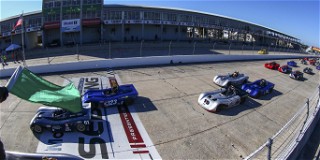 The 2023 season got underway officially at Sebring international Raceway, with eight opening race groups on the Hoosier Racing Tire SCCA Super Tour season. Saturday’s races were all 25-minute timed races, the first of 20 races spread across 10 doubleheaders on the calendar.

Race Spec: Up first was the 52 car Spec Racer Ford Gen 3 field, which took the green flag just before 10 a.m. when the ambient temperature was a very non-tropical 44 degrees and very breezy. Those temperatures made the drivers request for, and were accommodated with, an extra pace lap to get some heat in the tires.

To the surprise of no one, Brian Schofield took the win – but it didn’t come easy. He held off Russ Turner, Bobby Sak and Denny Stripling for the victory at his home track. Schofield has won at least one SRF Gen 3 race each year since 2019, and in 2018 he finished as the runner-up twice.

Keeping Themselves In Line: The Spec Miata field, led by some National Championship winning drivers, called a drivers’ meeting prior to the first qualifying session on Friday morning to set the class expectations going into the weekend – made even more urgent by the 92 cars on the entry list.

“We’re out there to race hard, but to race clean,” Elivan Goulart said. “Especially the guys that have been here for a while, they know what to expect. We wanted to impress on the newcomers coming in, the karters, they’re doing a great job but it’s a slightly different mentality. But look, they’re one-two today and they race hard and they race clean.”

That mission is more than a one-time meeting, of course, but the fruits of the labor began to show. Though there was some contact, not unexpected in a field so large, the red flag came from mechanical issues which left oil on the track.

The field reset and got a two-lap dash to the finish, with Tyler Gonzalez and Axel Cabrera finishing one-two, just in front of Goulart and the other 90 cars in the race.

Track Records, Re-Claimed: Two drivers took class wins and reclaimed their spot at the top of the track record list, taking advantage of the cool but sunny conditions that was tailormade for horse power.

Ken Kannard, who calls Sebring home, reset the track record from a year ago in his overall and F Production win. Jeff Dernehl bettered the GT-3 track record that he set all the way back in 2011.

It was an impressive feat for Dernehl. Sebring is famously known for its bumps and rough surface, and Dernehl had slipped a disc in his back prepping for this week’s race.

“I didn’t want to get out of the car, because I didn’t want anyone to see me cry,” he said after the race, only half joking.

The win, along with some ibuprofen, will help with that pain.

Formula Name Change: The former Formula 500 class is known, beginning in 2023, as Formula 600 – though the package hasn’t had any significant changes. The name aligns with a larger change dating back just a few years, when the past two-stroke, 500cc Rotax motors were joined by cars outfitted with 600cc motorcycle engines and transmissions.

Of course, the first Hoosier Super Tour race under the new name was won by, you guessed it, a 595cc two-stroke Rotax motor. Keith Joslyn took the win, running sixth overall.

Follow Live: It was highly anticipated coming into the race weekend, but the live-streaming partnership between the SCCA and DriversEye Live has passed its initial test to rave reviews. Those not at the track can follow along from home at SCCA.com/live, or on the Sports Car Club of America Facebook and YouTube pages.

That includes Sunday’s eight group races, scheduled to begin at 8:05 a.m. ET at a distance of 14 laps or 35 minutes, whichever comes first. Gregg Ginsberg and Brian Bielanski remain on the call for Sunday’s races.