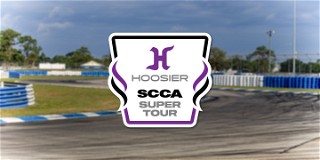 It’s new, it’s improved, and short of being there in person, it’s the best way to follow the Hoosier Racing Tire SCCA Super Tour during the 2023 competition season. In a partnership between the SCCA and DriversEye Live, this year’s Hoosier Super Tour will feature enhanced video and audio coverage at every event, with the familiar motorsports voices of Gregg Ginsberg and Brian Bielanski calling the play-by-play action. It's all kicking off this weekend, Jan. 13-15, 2023, during the Hoosier Super Tour season opener at Sebring International Raceway, with the broadcast starting today.

Following a dress rehearsal run at the U.S. Majors Tour at Homestead-Miami Speedway in early January, the DriversEye Live team, led by company owner Brendan Kaczmarek, has set up shop at Sebring International Raceway to cover the Jan. 13-15, 2023, Hoosier Super Tour weekend. Boasting up to 12 cameras (plus the possibility of in-car video) and an experienced production team ready to bring you all the action from around the track, the coverage will set a new standard for the Hoosier Super Tour series.

Event coverage will be streamed via the Club’s YouTube channel and Facebook page, bringing the action to you live, with on-demand viewing available after the fact.

For the Hoosier Super Tour weekend at Sebring, the broadcast is slated to begin at 1:40 p.m. EST on Friday, Jan. 13. Qualifying and race coverage will continue throughout the weekend featuring a complete, informative, and entertaining broadcast that includes timing graphics on screen to allow maximum enjoyment and a full-screen playback – whether watching on your phone, computer, tablet, or television.

The race schedule for the Hoosier Super Tour at Sebring can be found here.

The Broadcast Team Includes You!

It's a match made in heaven for Kaczmarek, who grew up a racing fan and learned in college at Daytona Beach that getting involved in motorsports was accessible – first with the SCCA in Flagging and Communications, but also as a sim racer. That sim racing background, and the virtual friends that became analog along the way, were the catalyst for the start of DriversEye Live and Kaczmarek’s expansion in motorsports participation.

“Our mission is to be able to share more racing with more people,” Kaczmarek said. “The next uncharted territory for that is amateur motorsports. We started doing this on the amateur endurance side of things to give those communities of racers an opportunity to still be together. It’s a great way to follow racing and be with people in a broader sense, and that’s what the SCCA is very, very good at. The people are always the reason I come back, and if we can duplicate that on weekends at the height of what road racing is with the Hoosier Super Tour, that’s what we’re trying to do.”

The production is very much a collaboration between the SCCA National Office, SCCA members, and the production team. The SCCA has invested in the equipment being used for the broadcast, creating opportunities for growth. Ginsberg and Bielanski bring their expertise, including Ginsberg’s history with the Hoosier Super Tour, the Tire Rack SCCA Time Trials National Tour program, his home Washington DC Region, virtual racing, and more. Likewise, Bielanski brings his voice and expertise from, among other things, the popular “Inside the SCCA” podcast and his spearheading video streaming coverage of all Cal Club Region road races.

“This is very much a collaborative step forward for the Hoosier Super Tour program, but the emphasis is on ‘collaborative’ from all of us as members of this Club,” Ginsberg said. “There was already a solid base of information and broadcast that had been laid down. We’ll start at Sebring and work our way forward, looking for battles on screen throughout the field and stories to tell about racers and participants off the track.”

As part of that collaborative effort that stretches beyond announcers and video crew, the team is looking for information and stories from each event. While Bielanski and Ginsberg will monitor the comments and feedback on the broadcast platforms, they can be reached at supertourannouncers@gmail.com.

The enhanced coverage of the Hoosier Super Tour events confirm that SCCA’s race events feature the best amateur drivers from across the country and the most competitive fields. Now, even if you miss an event, you don’t have to really miss a minute – either locked in and focused, or passively in the background while chores and work happen in the foreground.