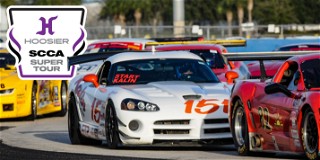 Despite sounding like something way in the future, the 2023 SCCA Road Racing season is actually upon us here in the present. The 10-event Hoosier Racing Tire Super Tour gets the green flag for the traditional opener at Sebring International Raceway, pulling the northerners out of the snow for large fields on the historic, winding circuit during the Jan. 13-15, 2023, weekend.

With eight race groups and more than 320 entries on the roster, the Hoosier Super Tour weekend dives right into the action. A pair of 25-minute qualifying sessions mark the opening day (groups six, seven, and eight get their second session on Saturday morning), with 25-minute timed races on Saturday. Sunday’s races are 14 laps or 35 minutes, whichever comes first.

And that’s just the tip of the iceberg.

The Sebring opener brings out the best and biggest of the East Coast, and beyond. A whopping 78 Spec Miatas are on the entry list, including defending SM National Champion Nick Bruni as he starts his title defense season. In fact, the Spec Miata field is slated to be the largest group at the event.

That said, there’s no shortage of full fields. Spec Racer Ford Gen3 boasts over 50 entries, but without defending National Champion Franklin Futrelle. Instead, he will be a part of the 35-car open-wheel group in Formula Enterprises 2.

In total, each run group averages 40 cars, with the smallest at press time featuring a stout 19 cars in the small bore open-wheel group.

This year’s Hoosier Super Tour sports a new look, especially for those who are not at the racetrack. DriversEye Live is providing live video of the weekend for each and every Hoosier Super Tour, with Gregg Ginsberg and Brian Bielanski on the play-by-play call.

With up to 12 cameras covering the racing action during each Hoosier Super Tour weekend, this season is poised to be a gamechanger for SCCA Road Racing.