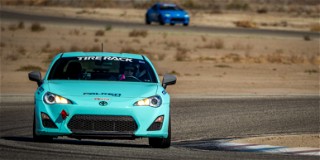 Halloween weekend in the southern portion of California’s Central Valley saw wonderful weather conditions with temperatures topping out in the mid 70s during the Tire Rack SCCA Time Trials National Tour at Buttonwillow Raceway Park Powered by Hagerty. In fact, things were so terrific Oct. 29-30, 2022, that two drivers set scary-fast times that bested the previous Time Trials National Tour (TTNT) lap record of 1:55.834 at the circuit.

Buttonwillow Raceway Park’s (BRP) configuration 13, run clockwise, was the layout used again for TTNT’s second-only visit to the venue. The 2.68-mile course also hosted Cal Club Region’s SCCA Divisional road races on Saturday and Sunday. Plus, there were plenty of costumed characters in the paddock that made the whole event terrifyingly fun for all.

Over the weekend, countless TTNT participants achieved their goal of setting personal best times around the circuit. Numerous new TTNT class records were also set. Unlimited 1 driver Reed Gibson and his 2017 Chevrolet Corvette, however, took top honors by turning the best lap of the weekend. His time of 1:51.104 on Sunday was more than four seconds faster than the previous track record, and was more than three seconds faster than the next closest competitor.

That next closest competitor was Tuner 2 (T2) driver Steven Case in a 2019 Tesla Model 3. Case’s time of 1:54.823 on Saturday was also faster than the previous track record, and helped him lock in a T2 victory. Austin Kirk, in a 1997 Chevrolet Camaro, took second in the class, and a 2018 Tesla Model 3 driven by Isaac Arciaga earned third.

The seven-entrant Tuner 4 (T4) class produced the tightest contest of the weekend. Jonathan Lugod, in 2019 Subaru BRZ, ended up winning T4 by only 0.465sec over Tyler Packard in a 2011 Mazda RX-8. Packard actually had the best time after Saturday’s action, but Lugod fought back on Sunday by cutting a full second off his previous-day’s lap. Khoa Cao finished third in class driving a 2007 Honda S2000, and only 0.03sec back in fourth was Tom Berry in a 1998 BMW M3.

Below are the overall top five finishers from Buttonwillow with name, class, car, and overall time.

KONI Podium Celebrations always wrap up TTNT events on Sunday afternoon. Class winners are lauded, and some additional superlative honors are handed out.

At Buttonwillow, the Time Trials Champion award went to Cal Club’s Thomas Guest Jr., the man responsible for making Saturday’s Hagerty Social Party a massive success. Guest worked hard to prep 40 lbs. of BBQ pork, as well as hot dogs, hamburgers, mashed potatoes, and so much more. Thanks to Guest, there was plenty of food for all, ensuring everyone on site was well fed so they could have a good time well into the evening.

The Spirit of Time Trials honor went to Manfred Oesting. His U2 MINI Cooper experienced troubles all weekend, and he was only able to turn a handful of laps. Even though he spent a lot of time diagnosing car issues, he still had a huge grin on his face both days – and was already inquiring about TTNT’s next visit to Buttonwillow.

Novice driver Cliff Neill received the Most Improved award. Driving a 2020 Chevrolet Corvette in the Max 2 class, Neill managed to drop his lap time by more than 20 seconds from Saturday morning to Sunday afternoon.

The Crossover award, bestowed upon a participant coming from another SCCA discipline, went to Maia Kirk. She arrived at Buttonwillow in a 2013 Scion FR-S, a car she drives in the Solo Spec Coupe class at autocrosses. But at TTNT, the avid SCCA autocrosser ran in the Sport 6 field, wheeling her car to a runner-up finish in the class.

Another outstanding season of Time Trials #funwithcars comes to a close Nov. 5-6, 2022, in Braselton, GA, at Michelin Raceway Road Atlanta. The splendid 2.54-mile, 12-turn circuit has produced lots of memorable motorsport moments over the years, and who knows what new memories will be generated this year during the TTNT stop.

Registration is open now for the Tire Rack SCCA Time Trials National Tour at Michelin Raceway Road Atlanta Powered by Hagerty. Sign up today so you don’t miss the last TTNT event of the 2022 season!