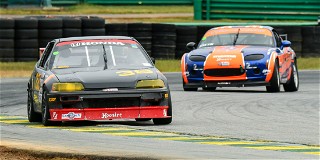 Defending STL National Champion Danny Steyn, in the No. 9 Ocean Machinery/Nelson/OPM/G-Loc Mazda MX-5, earned the Tire Rack Pole Award earlier in the week after setting a new STL Runoffs qualifying track record for VIR. Lined up next to Steyn at the start was Joe Moser in the No. 36 King Motorsports/Hoosier/Carbotech Honda CRX Si, who was victorious Saturday in the Super Touring Under Runoffs race.

Steyn, who won STL back in 2019 when the Runoffs first visited VIR, moved to the lead this year in Turn 1 at the start, but Moser was able to get by Steyn in the second turn. On the same lap in the Climbing Esses, Steyn moved back to the front with Moser in tow around the 3.27-mile, 18-turn circuit.

On the second lap, Moser’s engine faltered and he pulled into the pits and out of the race. That moved Greg Maloy, in the No. 38 Function and Form/Carbotech Honda CRX, to second. Trever Degioanni was then third in the No. 17 Motion Control Suspension Acura Integra GSR.

Midway through the 15-lap race, Steyn had built an almost eight-second lead. But with three laps remaining, Maloy had closed in on Steyn who was wrestling with gearbox woes. On lap 12, a limping Steyn was passed by Maloy on the way down the 4,000-foot backstretch. That lead was never relinquished as Maloy, of Oak Park, MI, went on to claim his first SCCA National Championship a few laps later.

“This is amazing,” Maloy said while holding his commemorative bottle of Mazza sparkling wine. “This class is so tough. All the work is definitely worth it. To come out on top is an incredible feeling.”

Steyn, of Fort Lauderdale, FL, tried to take a last-lap stab at victory, but had to settle for the runner-up finish. That earned him his fifth podium appearance at the Runoffs.

“Racing is an incredibly heartless and cruel mistress,” said a smiling Steyn afterwards. “I don’t know why we love racing so much. I know I’m going to be so miserable for an entire year. But I’m spending this weekend racing in a car with a grin across my face.”

“This is fantastic,” Degioanni said. “We worked really, really hard on this car. We’re super stoked for where we’re at. We were excited just to turn a lap in the race, and excited just to get here.”

The battle for sixth and seventh was positively thrilling throughout the race. Chuck Hines, who started 13th in the No. 57 Auto Business Inc/Slim Chance/West Mazda MX-5, had the sixth spot; but Olivier Jean Francois and his No. 189 Toyota 86 wanted that position. On lap nine, Francois spun exiting Oak Tree Curve, which allowed Hines to scamper away. However, Hines returned the favor when he spun towards the end of the race, allowing Francois to improve a position and finish sixth while Hines settled for seventh.

The Sunoco Hard Charger award went to Steve Wickersham who started 23rd and finished 12th in the No. 82 AngrySheepMtrSprt/Hoosier/Carbotech Mazda Miata.