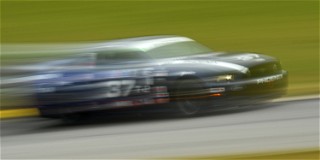 Conditions were tricky as three-quarters of the 18-turn, 3.27-mile circuit was dry; but the other quarter was damp — and wet through pretty crucial portions, including Oak Tree Curve. But the track was dry enough that Tire Rack Pole Award winner Kurt Rezzetano took his No. 37 Phoenix Performance/Hoosier/Hawk Ford Mustang GT out on dry tires. Starting next to him was Charlie Peter, in the No. 66 Phenix Label/Hoosier/Red Line Oil BMW M2CS Cup car, who was also on racing slicks.

Rezzetano, the defending T2 National Champion, took the lead before Turn 1 at the start. Peter settled into second, and the No. 46 Fall-Line Motorsports Porsche Carrera S driven by Mark Boden was third. Fighting for fourth and fifth were Tim Kezman, in the No. 144 Fall-LineMotorsports/Lemons of Love Porsche 996, and David Sanders in the No. 73 Phoenix Performance/Hoosier Chevrolet Corvette C5 Z06. Alan Kossof, driving the No. 22 Solano USA/Performance Eurowerks Porsche 996, sat sixth in the mix.

Boden got by Peter for second place on lap four while heading down the 4,000-foot backstretch, and Kossof took fifth from Sanders. On the following lap, Peter took the position back from Boden, who reacquired the runner-up position from Peter shortly after. All the while, Rezzetano had stretched out a five-second advantage.

A little further back, Kossof was all over Kezman for the fourth position until he spun on lap nine in Oak Tree Curve. That took the pressure off Kezman, and moved Sanders back up to the fifth spot.

On lap 11, Peter was able to get by Boden again in the first turn. And on the same lap going through the Climbing Esses, Boden’s car spun wildly into the grass, taking him out of contention for a podium finish. Several other cars found the tire wall at Oak Tree Curve, which brought out a full-course yellow, erasing Rezzetano’s then 11-second lead at the time.

Because of oil on track in Oak Tree Curve, and limited time remaining, the T2 race was checkered after 12 laps. The early end meant Rezzetano, of Phoenixville, PA, successfully defended his T2 National Championship while earning a fourth Runoffs victory.

“This feels really good,” Rezzetano said with a smile and bottle of commemorative Mazza sparkling wine. “Those track conditions were unbelievable. I was sliding out of Oak Tree every lap, bigtime, sideways. I was really just sideways every lap.”

“Mark and I were fighting so hard, and clean,” Peter said afterwards. “In order to run up front, I had to really hustle my car. I would’ve probably preferred if all the rain wasn’t down at that portion of the track, but it’s fun because it’s terrifying.”

When Boden left the track, Kezman, of Franksville, WI, moved up to third. The effort earned Kezman his third-ever appearance at a Runoffs podium celebration.

“I wish it would’ve gone back green for a couple laps because that might have been interesting,” Kezman said after the race. “But this event is the pinnacle. So when you can get on the podium, that’s good.”

Sanders came home fourth, and Kossof collected himself to finish fifth. The Sunoco Hard Charger award went to Gregory Schermer who started 13th and finished 10th in the No. 149 Porsche 997.

Photo caption: Kurt Rezzetano streaked to victory in Touring 2 in his Ford Mustang GT at the 2022 SCCA National Championship Runoffs.