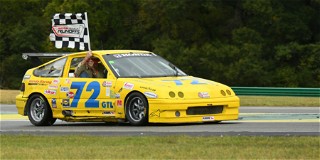 It was a battle of champions in GT-Lite (GT-L) at the 59th SCCA National Championship Runoffs taking place Sept. 24-Oct. 2, 2022, at VIRginia International Raceway (VIR). At the end of the race, Peter Shadowen of West Palm Beach, FL had driven his No. 72 Honda CRX to his fifth Runoffs victory.

Shadowen began the week by earning the Tire Rack Pole Award after laying down his fast time of 2:07.789 on Tuesday, the first day of qualifying. That's about 0.6 second faster around VIR’s 3.27-mile, 18-turn circuit — located along the border of North Carolina in Alton, VA — than second place qualifier Brian Linn of Hermosa Beach, CA. Linn, himself a two-time SCCA Champion, drove his No. 121 Goodyear/Carbotech/Race for RP Nissan 200SX SE-R to a top qualifying time of 2:08.489 on Wednesday.

Behind Shadowen and Linn sat Jonathan Goodale of Conifer, CO in the No. 04 Mazda/Hoosier/Summit/Hawk/Penske Mazda MX-5 Miata, with 10-time SCCA Runoffs champion Michael Lewis of Poway, CA on the outside in the No. 32 Goodyear Mazda RX-7.

As the mid-morning race got underway on Saturday, the moisture left over from the previous day’s rains was still drying out on the track surface. Tire choice was a critical factor, and drivers were betting their finishing positions on the next hour’s weather. “We had the rain tires on the car last night, fully expecting to use them. We were up at 3 am looking at the radar weather report,” Shadowen said. “We didn’t see anything coming, so we got up at 6 and hand-grooved a set of slicks to make intermediate tires.”

Most of the field chose to race on full rain tires, which is treacherous on a drying surface.

That decision was key to victory as Shadowen led the field to the green flag. Linn ran side-by-side with Shadowen to the first turn before yielding the top spot. Behind them, Goodale and Lewis ran side-by-side through Turn 4 before Goodale claimed the third position.

With the field sorted, Shadowen set about clicking off good laps and creating a gap. “As much as I like a good wheel-to-wheel battle with somebody, it was a relief to be able to pull out a little bit after the first couple of laps and not have to contend with that in the wet. I knew it was going to take a few laps for the tires to come in and work.”

Back in the field, Lewis was on the move. He went past Goodale on the fourth lap, and then passed Linn for second in the sixth lap. But by that point, he faced an 11.6-second gap to catch Shadowen. As the leaders began to encounter lap traffic after the mid-point, Lewis steadily whittled Shadowen’s lead down to six seconds.

Meanwhile, Linn and Goodale were having the defining battle of this race, looking for the last step on the Runoffs podium. Goodale dogged Linn for several laps before a misstep in the “Hog Pen” corner allowed Goodale to slip by heading onto the front straight. But Goodale offered an opening in the highly technical Oak Tree corner and Linn got back around. As the race came to its final laps, both cars had exhausted their rain tires and were visibly sliding through every corner.

As the white flag flew, notifying drivers that it was now or never, the field seemed set in their positions. Suddenly, Lewis slowed in the uphill Esses and rolled to a stop by the side of the track. A broken throttle cable snapped his plans of another Runoffs podium with less than a lap to go. That put both Linn and Goodale on the podium as the checkered flag signaled an end to competition.

“Dry pavement and rain tires!” Goodale exclaimed. “I was being really cautious because I didn’t want to burn the tires off. So I’m running fourth and I look at who’s ahead of me, and there’s like 15 national championships between them. Then I saw Lewis get by Linn and I thought, maybe there’s a chance.”

“I could see Jon coming,” Linn said. “I was struggling and I thought it was inevitable that he would come and get me, and he did. But then I saw him slipping and I realized he was struggling as much as me! That motivated me. I did my better laps right after that to catch him.”

Fourth place went to James Gregorius of Lakeville, NY in the No. 9 Livonia Redemption Center Mazda RX-7, and fifth to Graham Fuller of Summit Point, WV, driving the No. 2 Honda CRX. The Sunoco Hard Charger award went to Chris Kopley of Easton, CT in the No. 03 Advanced Environmental Redevelopment Mini Cooper, gaining five positions during the race.

The top three drivers were greeted at the victory podium with a bottle of bubbly form Mazza Vineyards, the “Official Sparkling Wine” of the Runoffs.