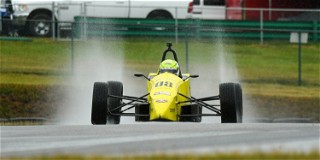 On a damp and chilly Tire Rack Pole — on the first of three Hagerty Race Days at the 2022 SCCA National Championship Runoffs — sat defending Formula F (FF) champ Jonathan Kotyk from Atlantic Beach, FL, driving his Mygale SJ14 Honda. The conditions mattered little to Kotyk, though, as he put on a dominating performance on his way to this fourth FF SCCA National Championship title.

At the green flag, second-place qualifier Tim Kautz, driving the Breaburn/Hoosier/Euroquipe/Two Dogg Piper DF3D Honda, appeared competitive, but it was third-place qualifier Theodore Burns who made the impressive dive into the lead in Turn 1 in his Kelly-Moss Road & Race Piper DF05 Honda. Kautz’s struggles weren’t over, though, as he looped his car in Turn 1. Kotyk, meanwhile, ran side-by-side with Burns through Turns 4 and 5 to reclaim the lead heading into the Snake portion of VIRginia International Raceway — and he never looked back, amassing a 30-second advantage before double-yellow conditions brought the race to an early conclusion.

“It was clockwork, and the [car] prep was great,” Kotyk explained of his win after dousing himself with Mazza sparkling wine on the podium. “I did my studying back in 2019 [at the Runoffs at VIR] when we ran in the wet, so I had at least a little practice from that event.”

While Kotyk ran away from Burns, Nolan Allaer in his Martin/Chandon/Evan Williams Van Diemen RF00 Ford battled Trevor Russell’s RiceRace/Hoosier/Primus/Red Arrow Mygale SJ14 Honda in a race for a step on the podium. Then, exiting Hog Pen, Allaer slid into the grass, handing the position to Russell, who was up to third from his sixth-place grid position.

Russell made a move on Burns three laps in, laying a claim to second — although Burns didn’t make it easy. Soon after, Porter Aiken passed Burns, slotting his Aiken Racing/Chillout Motorsports Piper DF05 Honda into third.

Mid race, the battle raged between Burns and Allaer, with heavy pressure coming in Hog Pen and Turn 1. Allaer ultimately gained that position, and with a few laps remaining, he advanced another spot when Aiken slid, placing Allaer in third.

“We had a great start,” said Allaer, who hails from Gross Pointe, MI. “I made a quick, early decision that cost me and made me go off in Hog Pen. I don't remember what [position] I dropped down to, but it made for a very eventful race battling with Porter Aiken and trying to get Trevor Russell right at the end.”

With 12 of 15 laps completed, a full course yellow came out — caused by two spinning cars — and evaporated Kotyk’s 32-second lead. The officials opted to end the race, bringing the field to the checker under caution. At the stripe, it was Kotyk with his fourth Runoffs title in five years, followed by Russell, Allaer, Aiken, and Burns rounding out the top five.

“I was hoping we’d get a few green laps,” Russell said of the caution, although he appeared content with his second-place finish. The Tuscon, AZ, driver’s run from sixth to second ultimately earned him the Sunoco Hard Charger Award.

Photo caption: Jonathan Kotyk runs away from the rest of the FF field, headed for his fourth Runoffs Championship win.