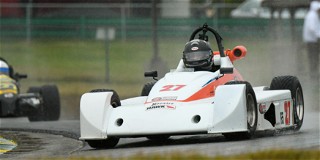 In damp conditions, Tire Rack Pole Award winner James Weida, in the No. 22 Formula X-1/Weida Apartments Scorpion S1 Rotax, led the rain-tire shod field to the green flag with Calvin Stewart alongside in the No. 07 SabbathTruth.com/Hoosier Novakar J10 Suzuki. But it was Sven de Vries, defending F5 National Champion in the No. 27 Green Hawk Computers/Linn Racing Novakar J9 Suzuki, who grabbed the lead going into the first turn.

Tiptoeing around the 3.27-mile, 18-turn circuit, de Vries built a nearly 16-second lead on Weida after five laps into the 15-lap race. Eric McRee, in the No. 46 BurrellVodka/McReeLaw/Hoosier/M3Msp NovaRace Blade Suzuki, was further back in third after mixing it up for a bit with Stewart.

The halfway point of the race saw de Vries with a 40-second lead on Weida, whose rear-diffuser appeared to be loose and bouncing around at the bottom of the car. By the time de Vries, of Holt, MI, crossed the finish line to claim his second straight Runoffs win, his lead was more than a minute.

Upon seeing wet conditions before the race, de Vries had plans from the start to make a move into Turn 1 for the lead. Comfortable with driving in the rain, the weather Friday morning gave him hope that another National Championship was possible.

“That’s twice in a row now,” de Vries said of his victory. “Once in the dry, and once in the wet.

“I’m pretty pleased at how well this car handles in both weather conditions,” de Vries continued. “We’re usually down on top speed compared to the other guys, and around this track you have three very long parts at full throttle. The wet helped us out a little bit, and we made it work.”

Weida, of West Lafayette, IN, had a little off-track excursion late in the race, but got back on the circuit without losing a place and came home in the runner-up position. That’s the fourth Runoffs podium finish for Weida.

“I was hoping for a dry race, but it is what it is,” Weida stated while holding a bottle of Mazza sparkling wine awarded to the top-three Runoffs finishers. “We made the call to run full wets, which was the right choice. But we missed setup a little bit, and the car was a little loose.

“I tried to drive it, but spun three times,” continued Weida. “But I can’t complain. It’s a great week if you’re on the podium at the Runoffs.”

McRee, of Lapeer MI, held on for third, which was his second podium appearance at the Runoffs. When asked about the rain conditions after the race, McRee stated emphatically how much he dislikes the wet.

“I’m a horrible rain driver,” McRee admitted. “I hate driving in the rain, but it was a necessary evil. If this wasn’t the Runoffs, I probably would’ve just sat it out, to be honest. But I’m glad I didn’t sit it out.“

Stewart finished fourth after spinning late in the race, and Keith Joslyn finished fifth in the No. 55 Spirit Motorsports Scorpion Rotax. The Sunoco Hard Charger award went to F. Russell Strate Jr. in the No. 9 Red Devil Suzuki after starting 10th and finishing sixth.