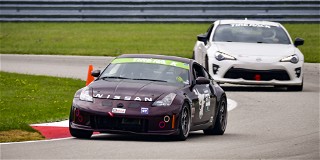 It was an action packed few days in Wampum, PA, as SCCA’s Steel Cities Region put on its End of Summer Showcase Festival at Pittsburgh International Race Complex (PittRace). More than 375 fans of having #funwithcars came together over the weekend to enjoy a multitude of activities offered by the Sports Car Club of America.

One exceptionally neat part of the event was how a handful of drivers took the opportunity to crossover and participate in varying activities.

While temperatures were in the low 90s, the late summer weather for the Aug. 27-28, 2022, event was outstanding. So outstanding, in fact, that many TTNT participants reset track records and posted new personal bests.

Thankfully, PittRace has ample room – and plenty of paved surface – to facilitate a multifaceted event all at once. For TTNT entrants, the 1.8-mile South Track was used Saturday morning for TrackAttack sessions. Saturday afternoon saw the 1.6-mile North Track utilized for TrackSprints before the Hagerty Social Dinner Party fed the masses. Then it was the 2.78-mile, 19-turn Full Course that came into play on Sunday.

While lots of people performed admirably at PittRace, Devan Keeling perhaps excelled the most. In his 1996 Ford Mustang, Keeling won the Unlimited 1 (U1) class by 3.552sec over Jason Anderson in a 2003 Chevrolet Corvette. Finishing third in U1 was David Burnham in a 1984 Maserati Biturbo.

Winning U1 wasn’t Keeling’s only accomplishment, as he also took the overall victory. With a time of 1:48.769, Keeling also now holds the record for fastest TTNT lap on the PittRace Full Course, a mark previously owned by Tom O'Gorman.

Anderson had one heck of a weekend, too. It was one year ago when he went through a competition drivers school during the Steel Cities End of Summer Showcase Festival. This year, he participated in the weekend’s road races at PittRace, taking the Touring 1 victory in the same car he used to claim second overall – and second in U1 – at the TTNT event. For that effort in two different SCCA activities, Anderson received TTNT’s Crossover award at PittRace.

The largest TTNT class of the weekend was Tuner 4 (T4) with 16 entrants. The competition was tight as Matt Hugenschmidt, in a 1997 BMW M3, took the win by only 1.361sec over a 2005 Honda S2000 driven by Vincent Mak. In third was Nathan Gess, who was co-driving with Hugenschmidt. Those three drivers were all faster than the previous T4 record at PittRace, a mark Hugenschmidt now owns solely thanks to a 1:59.857 lap around the Full Course.

KONI Podium Celebrations wrapped up the event on Sunday afternoon by recognizing top performers in each class. Superlative awards were also handed out, such as Top Novice honors bestowed upon James Mulder, winner in the Sport 4 class. While this wasn’t Mulder’s first TTNT event, he has proven to be a very attentive driver in his 2021 Toyota Camry, working well with others while on course.

The award for Most Improved went to Wendy Thanisch. This Sport 1 driver has taken part in several TTNTs, displaying constant improvement. She’s becoming more comfortable with the 2020 Chevrolet Corvette she wields, continually advancing as a track driver.

Adam DeLong received Spirit of Time Trials honors for his unwavering help at PittRace. DeLong was originally scheduled to participate in the event, but car troubles kept that from happening. However, he still showed up to lend a hand, and was a wonderful grid worker who displayed oodles of enthusiasm over the course of the two days.

And finally, the Time Trials Champion award went to Phillip Jue, a longtime TTNT participant who has shown much support for the program. Recently, he has also been helping SCCA’s Chicago Region build its Time Trials initiative, and still finds time to compete at Global Time Attack and #GRIDLIFE events, showing just how much he supports the sport as a whole.

TTNT is making only one trip out west this year, and that will take place Oct. 29-30, 2022, at Buttonwillow Raceway Park in California’s Central Valley. This event will take place alongside a road racing weekend hosted by Cal Club, which means there will be lots to see and do over two days.

Registration is open now for the Tire Rack SCCA Time Trials National Tour at Buttonwillow Raceway Park Powered by Hagerty. Mark your calendar and reserve your spot today by clicking the link below.