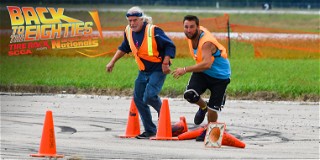 In March, the preliminary run days for the Sept. 6-9, 2022, Tire Rack SCCA Solo National Championships were announced. A lot has happened since then – namely, we’re just over two weeks from the massive event’s kickoff, plus the event’s 1980s theme was announced (Great Scott!) – and now, the event’s run/work order has been revealed.

Dialing in the correct run/work order for the Solo National Championships is vital to the event’s success in accommodating all driver’s going for fast times. After all, the Solo Nationals is no small-time house party (admittedly a 1990 reference, but whatever, it’s close enough), with more than 1,100 autocrossers having already registered.

Those with a keen eye will notice that the Thursday/Friday run days feature four run groups rather than the traditional five.

“Balancing the run days at the Solo National Championships is a complicated undertaking, with many factors at play,” SCCA’s Director of Solo Rick Myers explains. “This year, several class entry counts for Thursday/Friday appear that they will benefit from a four-group structure rather than five, with the change ensuring consistent competition scoring on course, less downtime, and a better experience for all competitors.”

This shift brings with it an alteration in Friday’s award presentations.

Entry counts for the 2022 Solo Nationals are impressive. At last count, E Street, F Street, Solo Spec Coupe, and Street Touring Xtreme had all surpassed the 40-driver mark, with C Street poised to join that “over the hill” club soon. Leading the pack running up that hill is D Street, boasting more than 60 drivers ready to hit the concrete in Lincoln, NE.

At this point, just about all the information you need for the 2022 Solo National Championships is available. Where’s the beef, you ask? Why, on the Solo Nationals homepage, of course – which we suggest giving a solid read, since the more you know, the better. And that’s one to grow on.

Also important is that it’s not too late to register for the Tire Rack SCCA Solo National Championships (Aug. 29 is the deadline for online registration) as well as the multitude of Solo Nationals contingency programs.

Once entered, all that’s left is to pack your air pressure gauge, torque wrench, helmet, Koosh balls, maybe some jellys, shoulder pads, and a boatload of hair product – then hit the road to Lincoln!