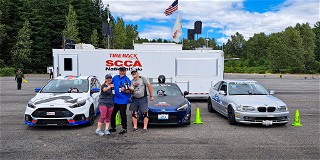 The Tire Rack SCCA ProSolo Series held its ninth event of the 2022 points series in scenic Packwood, WA, at the Hampton Mills site over the July 15-17 weekend, despite rumors swirling for the fourth consecutive year of an impending sale that would halt events at the site. As it was, the ProSolo went off without a hitch, with 138 drivers taking to the courses.

Saturday saw beautiful sunny skies and amazing views of Mt. Rainier with temperatures in the upper 70s, though winds increased throughout the day and gusted over 40mph during the final run groups. Sunday saw mostly cloudy skies with a chilly start warming to the upper 60s by the end of the challenges.

The Howard Duncan Greenlight Fund recipients, offered free entries for their first ProSolo starts, were Jeff Reece and Jeff Smith. Reece finished ninth in the bump class, while Smith was scored in sixth in SSC.

Donations made to the SCCA Foundation can be earmarked for the Greenlight Fund here.

ProSolo class competition was marked by lead swaps, come-from-behind victories, and close competition. Dan Bullis took the early lead in A Street after Session One, but Jaejun Yoo took over the top spot on Saturday afternoon, extending his lead on Sunday morning for the class victory.

The Ladies 2 indexed class saw the top of the order changing run by run with close competition throughout the weekend. Ultimately, Caitlin Dunlap, flying in from Florida, threw down on her final left-side run to jump from fourth to first. Dawn Danton finished second, only 0.007sec back with Gretchen Weidemann snagging third, another 0.07sec second from Danton. Likewise, Annie Gill took down the Ladies 3 class by just 0.008sec over Jessica Yeung.

Eric Stoltz took an early lead in Street 5 and never looked back, ultimately taking the class by a one-second margin. The competition behind him was fierce, however, with less than one tenth ultimately covering second through fifth. Oliver Taylor and Stephen King took second and third to make it an all-Miata podium.

In all, five classes were decided by less than a tenth of a second. In addition to the two Ladies classes above, Matt Jones topped Bump by 0.032sec, Andy McKee took R2 by 0.042sec, and Jay Balducci led S3 by 0.069sec.

Bonus Challenge: Area 9 Board of Director Charlie Davis didn’t need the extra pull of his leadership position, instead marching through the Bonus Challenge from his STX class to take the win over Amber Dawn Jorgensen.

Ladies Challenge: After the close class competition, the Ladies Challenge was anyone’s to win. Danton got revenge over class leader Dunlap in the semi-finals, then bested Gill in the final to take home the top spot.

Super Challenge: If the idea of Solo Spec Coupe is that it’s a driver’s class with no margin for error, Kevin Dietz proved the concept at Packwood. Taking the class win by 0.106sec, he set off through the Challenge bracket with the same driving style under his belt. He rattled off three wins before meeting up with Alex Paraskevas, who was second in SSC, in the semifinal. Topping him yet again, Dietz finished the weekend with a win over Laurie Matthews for the Super Challenge victory.

Just two events remain on the Tire Rack SCCA ProSolo calendar prior to the ProSolo Championship Finale at Lincoln Airpark, with the next event being the Tire Rack Toledo ProSolo at the Toledo Express Airport, taking place July 22-24 in Swanton, OH. Following that is the Tire Rack Oscoda ProSolo at the Oscoda-Wurtsmith Airport in Oscoda, MI, on Aug. 5-7.