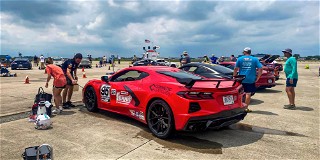 Found in Indiana about midway between Fort Wayne and Indianapolis, the city of Peru rests alongside the Hoosier Heartland Highway and holds a special place in the hearts of many autocrossers. Just outside the city limits is Grissom Aeroplex, a popular site for SCCA National Solo competitions, and the venue for this past weekend’s Tire Rack SCCA Peru National Tour.

More than 230 drivers came out to Grissom Aeroplex on June 10-12, 2022, for fun and stimulating competition at the event hosted by SCCA’s Indianapolis Region. The weather was not a foe over the weekend, as temperatures topped out in the upper 70s to low 80s on Saturday and Sunday. Skies progressed from mostly sunny in the morning to overcast by the end of Saturday, and cloudy conditions persisted on Sunday. Rain stayed at bay until after competition runs had been completed.

Part of what makes Grissom Aeroplex so special is its smooth, grippy, World War II-era concrete. And because it’s an old airfield, there’s more than ample paddock room and space to create fast, open courses.

There were plenty of interesting battles in Peru, but a handful of Street classes stole the show. D Street (DS), with a wide variety of cars being used by its 10 entrants, saw co-drivers scrapping Saturday as Stuart King led Trevor Jones by 0.086sec, both sharing a 2022 Toyota GR86 car. Only 0.054sec behind Jones was Jack Burns in a 2022 Hyundai Veloster.

By the end of Sunday in DS, King fell back and settled for the fourth and final trophy spot. Up front, Jones took the win by 0.339sec over Andrew Hille, who drove his 2017 Honda Civic Type R from sixth on Saturday to the runner-up spot on Sunday. In third was Burns.

The H Street fight was intense on Saturday as Claude Lawrence, in a 2018 Honda Civic, eked out a 0.018sec advantage on Rob Krider, who was wielding a 2020 Honda Civic. In the mix and only 0.034sec behind Krider was co-driver Sam Karp.

Come Sunday, Lawrence lost grip on the lead and finished third. Krider, however, carved through the cones and earned a 0.410sec victory over runner-up Karp.

F Modified was packed, with a field led both Saturday and Sunday by Brad Smith, who ended up with a 0.825sec advantage on his co-driver, Dan Wheeler, with both men sharing the 2022 Doof Wagon. Keith Roberts, driving a 2004 Invader, was only 0.562sec back of Wheeler in third.

F Modified Ladies was hotly contested as Tamra Krystinik, in a 2001 NovaKar J9, had 0.421sec on co-driver Johanna Griest; 0.157sec further back in third was Andrea Wolfe in the Doof Wagon. On Sunday, Krystinik held tough and emerged with a 0.123sec victory. Wolfe, however, poured on the speed and finished in the runner-up spot, followed by Griest.

Then there was the Xtreme Street A class. Brandon Mihal, in a 2015 Subaru WRX STI, held the lead on Saturday night by 0.719sec over a 2004 Mazda RX-8 driven by Scott Baker. Mihal made two runs on Sunday, then the car had mechanical difficulties and couldn’t make a third and final run. That left Baker with a free shot, and a mark of 0.742sec to beat.

Full results from the Tire Rack SCCA Peru National Tour can be reviewed by clicking the button below.

If you haven’t heard, there’s a new Solo National Tour Points Championship for 2022, and you can learn more about the scoring methodology here. Many drivers added to their points tally during the Tire Rack SCCA Peru National Tour, and an update will be made to the points spreadsheet in the coming days. Click the button below to access that scoresheet.

Registration for events is open now. Spots are limited, so click the link below to learn more and secure your entry.