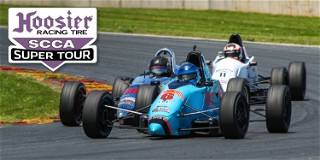 Though the June Sprints is not the oldest or the largest, as the tagline says: It’s not just another race. The 1956 season was the first at Road America, and the first year of the Chicago Region SCCA June Sprints. Today, the event is a prominent stop on the Hoosier Racing Tire SCCA Super Tour, with the action hitting the Plymouth, WI, road course once more on June 17-19, 2022, where the four-mile circuit is a favorite of racers and fans alike.

On The Line: Super Tour Points

Road America is the last stop on the 2022 Hoosier Super Tour calendar, which means it’s the last chance to earn points for the year-end championship prior to the National Championship Runoffs. The top six best finishes, plus the Runoffs, count in a racer’s season-long points total.

Time To Get Loud

Road America’s four-mile layout is one of the best places in America to unleash the power – which explains the 42 cars in the closed-wheel, big bore group on the entry list. An impressive field of 19 GT-2 cars, with 13 GT-1 machines also on the list, will thunder around Road America for the weekend. The field is not just large, but mighty – the top two finishers in GT-1 from the 2021 Runoffs at Indianapolis Motor Speedway, Thomas Herb and David Pintaric, are back to do battle.

It’s not all horsepower at Road America. Long straights mean getting through, and out of, every corner is important – that makes inch precision and the draft crucial in lower horsepower cars. This is why race groups like Formula Vee and Spec Racer Ford Gen3 are almost guaranteed close finishes.

In fact, many classes will see tight margins of victory. Though records aren’t as complete for the June Sprints, the closest margin of victory ever at the Runoffs came at Road America, when Chris Bovis took a 0.007sec win over Bobby Lenz in 2013 in GT-Lite.

The lesson? Keep a close eye on the finish line during the WeatherTech Chicago Region SCCA June Sprints.

Here’s what you need to know:

Keep Up With The Action

The WeatherTech Chicago Region SCCA June Sprints is on Road America’s spectator schedule for 2022, right there along the NASCAR Cup Series and the NTT IndyCar Championship. Tickets, camping, and more can be found at RoadAmerica.com.

More information on the 2022 Hoosier Racing Tire SCCA Super Tour from Road America can be found on the event page.