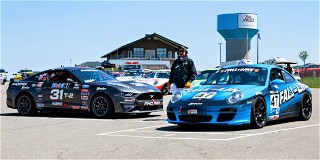 The 427-acre PittRace property, with its significant elevation changes, follows the natural terrain of the land. The circuit made its first appearance on the Hoosier Super Tour back in 2020, and the facility impressed drivers from the get-go. Like any great track, there are portions that present both challenges and thrills.

First Impressions
Even though Eric McRee has been running with SCCA for six years, the Formula 500 driver has not previously competed at PittRace. In preparation for this weekend’s Hoosier Super Tour, he spent some time doing simulation work on computers. Friday morning, he couldn’t wait to get out on course in his bright orange No. 46 NovaRace Blade. His first practice session did not disappoint.

“Some of the track features took me a little bit by surprise compared to the sim. There are blind apexes, and corners in the middle of a hill,” McRee said. “It’s awesome. Good track. I’m definitely coming back here again.’

Tackling Turn One
Chatting casually with drivers in the paddock, it quickly becomes evident turn one is a point of interest for many. After screaming across the start/finish line, the track rises slightly just before the 165-degree lefthander. For Mark Johnston, driver of the No. 71 Nissan 240SX in Super Touring Under, it’s one of his favorite corners.

While Johnston finds the first turn to be fun, GT-2 racer William Moore believes that corner is a difficult one. He’ll be looking to master it this weekend driving the No. 38 Chevrolet Camaro.

“The corner I’ve been working on the most is turn one,” said Moore, an SCCA racer for more than three decades who has been coming to PittRace since it opened. “It’s a corner … that is kind of blind. You know it’s there, and you know it kind of goes uphill at the end. It’s tricky because you over-brake going in there because it’s a little unnerving. But I think you can carry way more speed up through that corner. It’s very fun and it’s a great corner, but it is a little bit tricky.”

More Tricky Twists
PittRace’s circuit has some very tricky twists that keep drivers on their toes. There’s the “Corkscrew” portion that encapsulates turns three and four, as well as the “Esses” that begin at turn seven and run through turn eleven.

“The Esses … I think there is a lot of time to be made there,” said Chris Current, a 25-year SCCA competitor running the No. 01 Spec Racer Ford Gen3 car this weekend. “You need to make some decisions there, but you can’t see the track.”

Spencer Patterson, who has been racing Spec Miata for the last decade, also has a fair amount of experience at PittRace. He views the downhill portion of the circuit coming out of the Corkscrew to sometimes be a stumbling point for those seeking the perfect lap.

“You can sometimes drift off to the left there, then you drop a wheel because you’re rolling too much speed.” said Patterson, who drives the No. 79 Mazda Miata.

Moore, however, loves the Corkscrew portion of PittRace and said, “it’s really fun because you’re at the top of a hill, and that is blind, and it kind of breaks away from you. It’s like a mini-Laguna Seca. As you go down, you kind of compress the car and it feels like you’re sucked to the pavement. Then you’ve got a big hill you’ve got to go up. That part, to me, is really fun. If you get the timing right, you pick up a lot of speed there.”

Almost Last, But Not Least
It’s the last few corners at PittRace that seem to be the most challenging for drivers. It begins with a slight righthand kink through turn 16, followed by the 105-degree turn 17 and 207-degree turn 18, both righthanders. According to Johnston, the corners are very much a balancing act.

“Sometimes you’re carrying a lot of speed through there,” Johnston said. “You’ve got to make sure the car’s straight before you stomp on those brakes. That can get a little hairy.”

B-Spec racer Thomas Tremper has been competing with SCCA for nearly a decade, and concurred the final few corners that close out a lap at PittRace are pretty difficult.

“For me, the most difficult turns are those last couple,” said Tremper, who is driving the No. 23 Mini Cooper this weekend. “I’ve gone off there too many times to count. I don’t know what it is … but I just always seem to screw up that last turn.”

If you haven’t been to PittRace, this weekend is the perfect opportunity as admission is free for spectators who want to enjoy the Hoosier Super Tour. If you can’t be trackside, check out SCCA.com for Super Tour Radio presented by Hoosier Racing Tire, enhanced timing and scoring, and a few static video feeds. Saturday opens with 20-minute Qualifying 2 sessions, followed by 25-minute races beginning at 1 p.m. Eastern Time. A second round of racing then takes place Sunday starting at 9 a.m. Eastern Time.