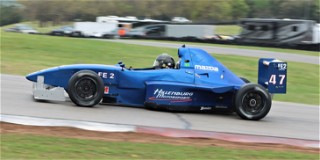 HMRC’s 1.8-mile, 10-turn circuit -- run in a counterclockwise direction -- is again the playing “field” for Hoosier Super Tour’s visit to the rolling Osage Hills of Northeastern Oklahoma. Saturday morning opened with cloudy skies, intermittent showers, and gusty winds for the first couple qualifying groups. But the weather soon settled down and the majority of competitors were greeted with dry conditions for their 20-minute qualifying sessions. Those results set starting positions for 25-minute races held in the afternoon under dry and windy conditions.

A Great Unknown: Weather shortened Spec Miata’s (SM) morning qualifying Saturday. So, there were lots of unanswered questions as to who might have the upper hand when the field took the green flag in the afternoon. Polesitter Travis Wiley led the way at the start, but it was Logan Stretch who settled into the lead for the first portion of the race.

Behind the front two was Matt Reynolds in the No. 74 Reynolds Bros Racing /Hoosier/ESR /Vintage Connection/G-LOC Brakes Mazda Miata, who was being hounded by Grayson Farischon. On lap six, Reynolds got by Wiley for second, and Farischon put Wiley down another spot on the following lap.

For the next seven laps, Reynolds bided his time until an opportunity arose, and he moved to first. Stretch fought back, but soon fell down the order. Farischon and Tyler Quance, however, stepped up and kept the pressure on Reynolds. But it wasn’t quite enough as Reynolds claimed the victory by 0.263sec over Quance, and Farischon came home third.

“I had a decent start coming from third position, and I was able to get around Travis early and just follow Logan around,” Reynolds said. “I could tell Logan’s transmission or something was going off, so I was playing it safe and just trying to get a gap on the other guys behind. Finally, Logan’s transmission blew, and I was able to get around. But Tyler then gave me everything I could handle. It was a great race.”

Byrd started the race on unscuffed tires, and the car was a handful at times. But he eventually claimed the FA lead with a couple laps remaining, and went on to victory.

“I wasn’t able to hold my lead at the start. In turn two, Paul was able to outbreak me on the inside and took the lead,” Byrd said after the race. “My car was loose, but I was eventually able to track him down over five or six laps. Then I was able to pass him going into turn four. From there I had my head down, just kept on going and tried to lower my lap times.”

Behind the FA duo, a battle was brewing between FE2 drivers Whitney Strickland and Charles Russel Turner. Timing issues encountered during damp morning qualifying forced Turner to start at the rear of the field. That gave Strickland a fairly good advantage early on. Lap after lap, however, Turner and his No. 47 PCS FE2 machine ate into that lead. He captured first place 16 laps into the race and went on for the win.

“This is my first time at this track, and I’m having a good time and like this track,” Turner remarked after accepting his first-place trophy. “It took me several laps to get through some of the slower cars. I just kept the pace up and finally caught up to Whitney. I wasn’t actually attempting to pass him at the time, but he made a little mistake, and I was able to get around him at that point.”

Rarely Far Away: Spec Racer Ford Gen3 (SRF3) is a class where the racing is awfully close 98 percent of the time. And after morning qualifying, that was again true as the first six cars were separated by only 0.162sec, with David Ogburn grabbing pole. But at the start of the race, Denny Stripling’s No. 41 Lightspeed Motorsports SRF3 jumped to the front of the 30-car field.

An incident on the first lap brought out a full-course caution. The race went back green again after only a couple laps, and Stripling went off uncontested to claim the checkered flag with a winning margin of 2.054 over Gary Glanger.

“There was a little bit of dicing behind me,” Stripling noted. “If you’re in the lead, the best thing you can ever see in your rearview mirrors is the front of two cars looking at you. I saw that view three or four times, and that gave me just a little bit of a gap.”

Turns out Stripling really needed that gap. The gusty winds blowing around the track at times made SRF3 cars a challenge to drive.

“The blustery, crazy, windy conditions … made it so you had to drive just under the ‘limit’ today,” Stripling added. “If you go over the limit, the wind shoves you out into the dirt. It happened to me a couple times, and it’s challenging. I had to hit my marks consistently today with the crazy winds, and it was not easy.”

All In the Family: Charlie Peter, in the No. 66 Phenix Label/Red Line Synthetic Oil BMW M2, had a pretty easy go of it on his way to a Touring 2 win. His father, Hans, also won. However, his victory in the No. 66 Phenix Porsche GT3 Cup car was a bit more difficult after starting on pole in the GT-2 class.

“I got caught up at the start behind a red Corvette GT-1 car. Then there was just a freight train of cars that went by on my left side. I went from fourth in the race to, like, eighth,” said Hans, who previously raced in the FA class. “I slowly picked through them all and ended up second overall, but first in GT-2. Pretty good deal considering this is a new car for us. We don’t have any tools for it, we’re still learning it. It’s quite different from Formula Atlantic to GT-2, but I’m liking it so far. I think it will be good towards the end of the year once we get it sorted out.”

In fact, the Johnson family actually came within 0.135sec of pulling off a “hattrick” on the day, but sibling Cliff Johnson came up just short in the Formula F race, finishing second in class behind Matt Boian’s’ No. 14 Piper DF-2C in what was a fantastic contest to end the day.

Sunday’s Schedule: A second day of action from HMRC opens Sunday at 8 a.m. Central Time with 15-minute qualifying sessions for each of the seven race groups. A second set of races then begins at 10:30 a.m. with 35-minute or 27-lap contests. Follow the excitement live online at SCCA.com for enhanced timing and scoring, the Super Tour Radio presented by Hoosier Racing Tire broadcast supplied by Performance Motorsports Network, and multiple trackside video feeds.