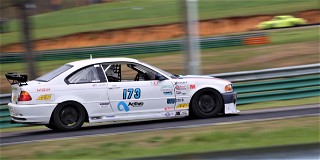 The Hoosier Racing Tire SCCA Super Tour is at VIRginia International Raceway April 8-10, 2022, for the fifth event of the season. The paddock is packed with more than 400 entries as drivers across eight race groups take on the twisty, fast and challenging 3.27-mile circuit that will also be the site of the 59th SCCA National Championship Runoffs later this year.

Weather conditions Saturday presented mostly cloudy skies with a slight wind and temperatures topping out in the mid 50-degree F range. What came from that was a day of fantastic action during races scheduled to be no longer than 25 minutes in length.

Restart Crucial in Super Touring Under: Saturday racing got rolling with an excellent Super Touring Under (STU) affair. Axel Cabrera, in a Honda Civic, was the class polesitter. But he fell behind the Lotus Exige of Anthony Geraci after the opening lap. On lap four, Cabrera jumped back up front with Geraci chasing and Mark Liller, in a Dodge Neon SRT-4, not far behind before a full-course yellow bunched the field back together.

The restart on lap seven was frenzied, and a pivotal moment occurred going into turn one as Cabrera and Geraci jockeyed for position. The battle gave others in the STU field a chance to enter the fray. Paul Azan, in the No. 173 AEM/TOYOMOTO Sales/Hoosier/Active Autowerke/Apex Alingment BMW 330ci, eventually moved from fourth to the lead and kept that spot for the last couple laps to claim victory.

“We went down into turn one and apparently the Lotus and Honda decided they wanted to see who could outbreak each other,” Azan said about the restart. “They took themselves out, and I was able to get around Mark in the SRT. From there it was an easy drive up the road because they did themselves in.”

Spec Miata Swarm: With nearly 70 cars, Spec Miata (SM) has the largest field at VIR’s Hoosier Super Tour this weekend. In that throng was defending SM National Champion Preston Pardus, as well as a host of other Runoffs winners that included Todd Buras who triumphed in 2019 at VIR.

Polesitter Danny Steyn led the group to the green flag Saturday, but several cars got together at the rear of the field while exiting turn one and a full-course yellow came out. Steyn held the front spot at the restart, but hot on his tail were Raiden Nicol, Jim Drago, Charles Mactutus, Brian Henderson, Todd Buras, Nick Leverone, Todd Lamb and Pardus.

As the minutes ticked away, Drago fell back in the pack while Mactutus pushed forward. With only a few laps remaining, Steyn drove down pitlane and into the paddock. That gave Mactutus a lead that Nicol desperately wanted. In the final few corners, Nicol tried valiantly to execute a pass, but Mactutus held tight in the No. 66 OPM Autosports/G-LOC Brakes/Hoosier Tires Mazda Miata to claim a 0.086sec victory.

“I had a decent restart, but missed a gear coming out of two and dropped back to fifth,” Mactutus said with a giant grin across his face after the race. “I fought my way back up … and was going to work with Danny, but then his engine started misfiring. After that, I hooked up with Raiden, and he’s a good partner to work with. Then I was able to hang on during the last lap.”

Turner held the top spot for a lap, but gave it up to Brian Schofield for two laps before regaining the lead. While Schofield, Denny Stripling, Caleb Shrader and Sak were not far behind at times, Turner never faltered on his way to victory in the No. 23 PCS SRF3 car.

“I got the benefit of some fighting going on behind me,” Turner said. “That allowed me to stay out front and maintain my pace. In the end, Brian made a little mistake on the last lap, which let me get a little bit of a lead and secure the win. It was an exciting race, and we fought all the way.”

Lead Battles in Race Group 5: The Group 5 race consisted of E Production, F Production, H Production (HP) and GT-Lite (GTL) cars. An incident on lap four caused an extended delay for track cleanup, but what came after kept the focus of trackside onlookers.

“I just hoped that I could stay up with him and make a move. I was hoping we could get to his bumper and at least give it a little shot,” Gregorius said about the restart. “It just worked out. I caught him in a draft and made a nice pass after Oak Tree Curve. That’s all it took.”

There was an equal amount of drama in HP as Will Perry opened with the lead driving a Honda CRX. Then it was Enrik Benazic and his Honda Civic that had the top spot when the full-course yellow bunched up things. When the checkered flag waived, Eric Vickerman and his No. 10 Goodyear/Vickerman Racing MG Midget found the finish line before any other HP competitor.

“We had some good battles up front,” Vickerman said. “After the full-course yellow, the three of us started nose to tail. Will and Enrick got into it hard with good racing, and that let me catch up a little bit. I got by Perry when he had some transmission issues. Then I made a divebomb move on Enrick after he blocked a couple of my moves earlier. We got into it a little bit at the end of the straightaway, and that opened the door.”

A Note on Race Group 3: The third race group of the day -- consisting of Formula Atlantic, Formula Continental, Formula Enterprises 2 (FE2), Prototype 1, Prototype 2 and Formula X cars -- was checkered without completing a full racing lap under green conditions. A couple FE2 competitors tangled in turn one at the start, which brought out a full-course yellow. A major effort was then needed to deal with oil on the racing surface. The cleanup process was time consuming, so that race was checkered with no further laps under green.