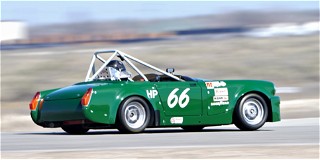 Competition at the third Hoosier Racing Tire SCCA Super Tour event of 2022, and the first of two planned visits to the West Coast this year, opened Saturday at Buttonwillow Raceway Park located in the southern portion of California’s Central Valley. Each of the seven race groups had 25-minute sprints around the 2.92-mile circuit to decide the winners.

Spec Miata Gets Things Going: While the Spec Miata (SM) group this weekend on the West Coast may be a touch smaller than customary, the 15-car field proved you don’t need 50 cars on track to thrill onlookers.

Polesitter Austin Varco and Ryan Gutile took turns leading most of the SM race. But Clement Lee, Joey Jordan and Alan Leukhardt IV were in the hunt, too, as well as Evan Jacobs who started second but fell back to fourth early. By the start of the last lap, however, Jacobs had moved to second behind Gutile.

The top position was maintained by Gutile on the final lap right up until the last quarter of the racecourse. Jacobs made a move in the Star Mazda Turn, grabbed first and came home with a 0.333-second victory -- his red driving glove pumping jubilantly out the window as he crossed the finish line. It was the only lap he led all race in the No. 35 Sigma Tech Solutions Mazda Miata.

“I didn’t get an ideal start … so I bided my time,“ Jacobs admitted after the race. “Ryan got a little bit of oversteer coming out of Phil Hill on the last lap, so I was able to get a bit of a run on him. Coming down into the Star Mazda Turn, I was able to move up on his inside. We got really, really close. We were probably an inch away from each other going into Star Mazda Turn. I was able to clear myself on the exit … and I got a clear run into the last corner and took the win.”

Golly Gee, How ‘Bout Them MGs: The MG Midget has a long history within Sports Car Club of America road racing. The Group 2 race Saturday showed that the Midget is still a car that shouldn’t be overlooked during competition weekends.

In H Production, Midget racers Ben Valentine and Lee Fleming had a fantastic fight. Valentine took the early lead, but Fleming kept tight on him after a full-course yellow and actually led a lap midway through the race.

With about seven minutes remaining, Fleming was poised to take the lead again. While exiting the final turn and preparing to fire down the front stretch, both Fleming and Valentine encountered traffic. To avoid contact, Fleming had to make an evasive maneuver to miss the slower car, and that put him in the dirt. Meanwhile, Valentine dodged the situation and hustled away to a 1.313-second margin of victory in the green No. 66 car.

“We just went back and forth throughout the race,” an out-of-breath Valentine said afterwards. “But it was all about traffic management. I was in the right spot and he wasn’t. It’s unfortunate, but we both got caught up in traffic at different times. I came out on top at the end, but it could’ve gone either way.”

The other MG Midget that took victory Saturday was the No. 7 Joe Carr Racing/Bumper to Bumper/United Rentals/EastPenn Canada car wheeled by Bill Okell. While Okell technically led every lap in the F Production race, things could’ve gone much different.

“The race had a little bit of everything,” Okell said. “It was a wild start. I spun into the grass but got going again. Then class leader Ethan (Shippert) spun out. The end result is we got a first-place finish.”

Breathing Room for Acker: Over the years, Spec Racer Ford Gen3 (SRF3) Hoosier Super Tour events at Buttonwillow have produced some wonderful races and moments. It’s not rare for an SRF3 victory margin to be tenths of a second. That, however, was not the case Saturday as TJ Acker drove off to a 5.526-second SRF3 victory in the No. 62 MBI Racing/Cindescency car.

Topping that performance later Saturday afternoon, Acker hustled to a 10-second victory in Formula Enterprises 2 behind the wheel of the No. 62 Bulldog Motorsports SCCA Enterprises FE2 Mazda.

“You just never know with this group if you’ll lose two or three seconds a lap,” Acker said about the FE2 class. “I try to get time when I can get time, which was what I was able to do today.”

In fine form Saturday, Ermish led every lap on his way to victory in the No. 38 REBELLO Racing/Goodyear/www.Ermish-Racing.com Nissan 350Z. Finishing in the runner-up spot about 10 seconds behind was former GT-3 Runoffs victor Collin Jackson in his trusty, blue Nissan 240SX machine.

While Jackson doesn’t finish in the second position too often, he certainly has to consider Saturday’s performance a small victory. That’s because Jackson, who resides in Canada, really hasn’t raced in nearly two-and-a-half years. Because of pandemic travel restrictions, he couldn’t pop down into the U.S. for SCCA races. This weekend’s Hoosier Super Tour at Buttonwillow is the first chance Jackson has had to be back out on course in a long time.

“It’s great to be back. I have all my friends here,“ Jackson said. “When you’re driving on the razor’s edge, you have to resharpen everything when you get back into competition.”

Sunday’s Schedule: Action continues Sunday morning from Buttonwillow Raceway Park with 35-minute or 17-lap races commencing at 8:40 a.m. Pacific Time. Spector entry is FREE for those who would love to experience the trackside excitement in person. If you can’t make it out to Buttonwillow, then tune in to SCCA.com for live Timing/Scoring, a couple static video feeds, and the Super Tour Radio presented by Hoosier Racing Tire broadcast.