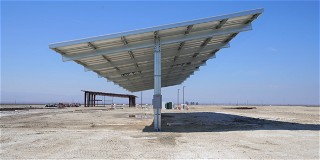 The picture accompanying this story may not look like much, but it has taken more than a decade to get to this point at Buttonwillow Raceway Park in California, site of this weekend’s Hoosier Racing Tire SCCA Super Tour.

The photo shows the two-story “Track 2” tower under construction in the background. In the foreground is a silver solar panels canopy tall enough to pull a hauler beneath and use as paved, shaded paddock space. Between the two structures you can also see where the new 16-unit Tesla Supercharger station has been placed, but is not yet powered up.

Track staff had hoped to conduct a first-ever event on Track 2 last fall. But a few “hurdles” were met in 2021, which is nothing too surprising when you’re attempting to build something out of nothing in California’s Central Valley.

“The track is graded, and the paddock is mostly graded,” Miserendino said. “There is still some underground stuff that has to get done … but it’s full steam ahead as fast as we can go. Nobody wants to see Track 2 open quicker than Buttonwillow Raceway … and the goal we’re now aiming for is to have it ready in the third quarter of 2022.”

Les Phillips, Buttonwillow Raceway Park’s president, said discussions about constructing a second, separate track at the northwest portion of the facility along Lerdo Highway began more than ten years ago. When it’s all said and done, the new layout will have a 50-foot wide front straight leading through the first turn, and the rest of the course will be 40-feet wide.

The “native ground” at Buttonwillow is near flat, but three hills of varied elevation change have been constructed for additional interest. Plus, the rubberized asphalt to be laid will offer superior grip and be a lot easier on tires. The layout will meet all the highest FIA track-specific standards, and plans still include a museum, space for food services, and new bathroom facilities.

Hosting its first event in 1995, Buttonwillow is very conveniently positioned alongside Interstate 5 about midway between San Diego and San Francisco. With the capability to accommodate 700 race cars on pavement, it’s a super spot for West Coast racers.

For this weekend’s Hoosier Super Tour visit, taking place Feb. 18-20, competitors will face the 2.92-mile No. 25 layout that includes corners such as the “Off Ramp,” “Phil Hill” and “Star Mazda.” The event is open to the general public and entry is FREE for spectators.

If you can’t be at Buttonwillow, check out SCCA.com for Super Tour Radio presented by Hoosier Racing Tire, enhanced timing and scoring, and a few static video feeds. Saturday opens with 20-minute Qualifying 2 sessions, followed by 25-minute races beginning at 12:15 p.m. Pacific Time. A second round of racing then takes place Sunday starting at 8:40 a.m. Pacific Time.