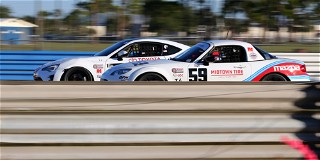 With entry interest coming in for the 2022 SCCA Enduro National Tour, the Endurance Racing Board is ready to release some of the finer details about the pit stops and driver stints.

The driver stint part is easy – there will be no maximum amount of time a driver is limited to in the car and drivers may join more than one team if they are listed on that team’s roster.

When it comes to pit stops, any stop which involves refueling will be a minimum of five minutes and fueling and mechanical work on the car will need to be done separately.

“There are a couple of reasons we wanted to have a minimum pit stop time,” said Jon Krolewicz, SCCA Enduro Nationals Event co-lead. “The first is that our classing system is based on the idea that you can add horsepower, but it will mean more fuel burned and a minimum pit stop time when fueling does a much better job at equalizing higher- and lower-powered vehicles.”

The second focuses on the amateur nature of the event, Krolewicz said.

“With all different abilities and the practice it takes to get pit stops right, we didn’t want to make this the pit stop national championships,” Krolewicz said. “We want the performance on track to be the key to winning.”

While stops for simple repairs won’t require a five-minute minimum, any stop with fueling will need to be a minimum of five minutes and during the stop, driver changes may happen while fueling, as well as driver assistance..

Teams may help the driver buckle in, connect radio wiring and refill a cool suit unit while fueling is going on because those count as servicing the driver. However, other service, including cleaning the window or physical work to the car would not be allowed while the fuel is going in.

While work on the car will need to wait until after fueling is done, there are some more restrictions on fueling.

During refueling, only 5-gallon dump cans may be used, and there will need to be two people performing that operation, and that means one person fueling, and another crew member covering the fueler with a fire bottle. A third is permitted if a catch-can fuel vent system is being used. All crew members involved in fueling will need to be in full suits and full-faced helmets with the visor down.

In addition to the pit stop rules, the Classing Calculator has been updated and as the rules take shape, there will be a more comprehensive Enduro section on the web site.