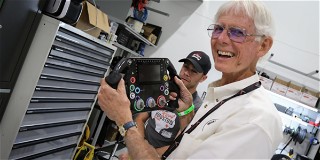 The Sports Car Club of America is amazing at creating special moments for many people. Most of these come clutching a gear shift, holding a steering wheel, waving a flag, pressing down on a radio button or holding your breath and hoping that cone you just hit stays upright and in the box.

Occasionally, the SCCA gets a chance to create special moments in quieter and less hectic settings and when the Runoffs visited the Indianapolis Motor Speedway this year, the SCCA Foundation’s “Indy Insider’s Weekend” created a few special moments and George Rogge found himself as the person enjoying them.

The SCCA Foundation counts one of its missions as “preserving the history of American motorsport.” Specifically, the Foundation funds the preservation of archives containing the history of the SCCA, which is why the melding of Rogges history – and a special visit to the Indianapolis Motor Speedway made such a perfect pairing.

Rogge, who first visited the Indianapolis Motor Speedway in 1963 for 500 qualifying, but his own racing began before that when his dad started the Sports Car Club of Indiana in 1956, and it became an SCCA region in 1959. For Rogge – who’s life has been a mix of automotive history (he owns and curates the International Auto Racing Museum in Gary, Indiana), the SCCA (he still has his race chair license) and the Indy 500 (he has owned a series of Indy 500 Pace Cars) – this would indeed be a special day.

Rogge’s day started with breakfast at Charlie Brown’s; the local memorabilia-filled breakfast hot-spot for teams, drivers and fans and then he worked his way over to the speedway where he would get to meet the President of the Speedway, Doug Boles.

While working race chair duties in 1997 Rogge got to spend some time with Boles and made his first VIP event more of a reunion of friends than a typical meet-and-greet.

Following that meeting, it was time for a very exclusive perk of the VIP trip – a tour of the Indianapolis Motor Speedway Hall of Fame Museum basement. This area – the “Fort Knox” of the museum where they make you put your phones and cameras in a box before you enter – houses some of the cars that don’t make their way to display on the floors above, and the tour provides a chance at a closer look that you don’t get when they are behind ropes.

There amongst the Indy 500 winners and automotive history the car that might have brought the biggest smile was the 1998 Indy 500 Corvette Pace Car. The bright purple and yellow stood out amongst the subtle tones of pre-war cars and was even louder than the 1977-winning “Foyt Orange” Indy Car a few meters away, but that’s not what brought the smile. It was the fact that in the parking lot was Rogge’s own 1998 replica pace car.

Rogge was definitely at home in the quiet crowded space.

“I’m into history,” Rogge said describing how he liked the museum tour, “every car I bought has history or is special.”

His wife Sue summed it up more succinctly when she said, “He is happiest is in garage when he looks at Corvettes.”

After the museum it was time for a visit which traded the wood and brass and aluminum of older automobiles for carbon and magnesium – a visit to the AJ Foyt Enterprises IndyCar shop.

There, in a visit that lasted until the lights were being shut off at the shop, Rogge was able to see IndyCars fresh from the Long Beach Grand Prix being disassembled and inspected up close, learn about what’s done to each car before and after races and even get to have some hands-on lessons about the features of an IndyCar steering wheel.

“I haven’t been to a modern race shop,” Rogge said, “it’s unbelievably clean.”

In addition to the VIP tours, Rogge got “an exciting” pace car ride in the rain, SCCA VIP Suite access and Sue braved the narrow ladder and got to spend some time in the starters stand.

Overall, Rogge’s experience was a great one, and the special series of moments came together to match Rogge, the Speedway and the SCCA Foundation’s goals of keeping, protecting and sharing the history of motorsport.

You don’t have to wait for the next sweepstakes to donate to the SCCA Foundation. The 501(c)(3) not-for-profit organization accepts donations year-round, contributing to numerous causes that benefit SCCA members and motorsports enthusiasts as a whole.