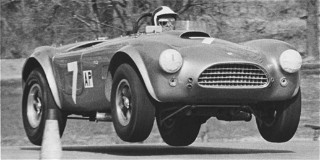 Bob Bondurant, inducted into the SCCA Hall of Fame at the 2014 SCCA Convention, passed away on Friday, November 12 in Paradise Valley, Arizona. He was 88.

Born on April 27, 1933, to John Roper Bondurant and Ruth Williams Bondurant of Evanston, Illinois, Bondurant is survived by his wife, Pat, who remains the President and CEO of the Bondurant Racing School.

A world champion driver in his own right, Bondurant may be most famous today for the driving school that he founded and bears his name, influencing countless numbers of SCCA racers with instruction. As a driver prior to opening the driving school after a career-ending crash in 1967, Bondurant teamed with Dan Gurney to win Le Mans and began his career as an SCCA B Production Corvette driver.

“I’m really honored to be voted into the SCCA Hall of Fame,” he said in 2014. “I have been racing all my life. I raced over in Europe, because I wanted to race against the world’s best. When Dan and I won at LeMans in the Daytona Coupe, that was the first time anyone had beaten the Ferraris. I had four of them chasing me for the final two hours, and they couldn’t catch me.”

In lieu of flowers, the family requests donations be made to the Team USA Scholarship fund, which can be done by contacting Jeremy Shaw at jshaw@teamusascholarship.org.