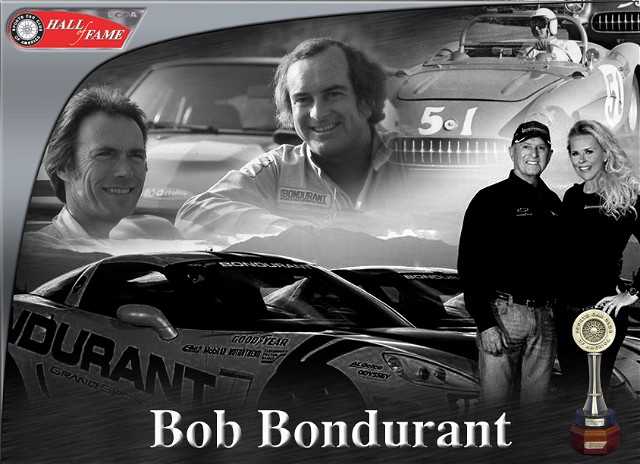 Bob grew up in car crazy Southern California with a passion for anything on wheels. By the time he was 18; he was racing an Indian Scout motorcycle, and moved to sports cars in 1956 at the wheel of a Morgan.

His racing career began to soar in 1959, when he drove a Corvette in the Southern California region to the West Coast "B" Production Championship, winning 18 out of 20 races, and earned the Corvette Driver of the Year Award.

His star continued to rise, and between 1961 and 1963, Bob won 30 out of 32 races in Shelly Washburn's Corvettes, and in 1963 he became a member of Carroll Shelby's Ford Cobra team, winning his first race at the Continental Divide Raceway in Colorado, followed by an overall win at the legendary LA Times Grand Prix GT race at Riverside in October 1963.

Subsequent wins in Shelby’s Cobras led to a stint in Europe with the team to compete for the 1964 GT Championship. Paired with Dan Gurney that year, Bondurant won the GT category and took fourth overall at the wheel of a Ford Cobra Daytona Coupe at Le Mans.

Bob continued to drive for Shelby in Europe through 1965, winning seven out of ten races, and earning the World Manufacturers’ Championship for the United States in a Shelby American Ford Cobra. The year also afforded him the opportunity to race Formula One for the factory Ferrari team in the 1965 U.S. Grand Prix at Watkins Glen.

In 1966, Bondurant continued in Formula One driving a privately-owned BRM, and for Dan Gurney’s Anglo-American Racers team. He also drove for Ferrari in the 1966 World Manufacturers’ Championship.

In addition, Bob served as a technical consultant for John Frankenheimer’s epic movie Grand Prix. Among the highlights of working on the film, Bondurant was responsible for training actors James Garner, Yves Montand and Brian Bedford for their driving roles.

After a career threatening crash at Watkins Glen in the 1967 USRRC/Can-Am race, Bob began to contemplate his future. He had enjoyed his experiences coaching the actors for Grand Prix, and teaching at a number of SCCA racing schools. He decided if he would take his experience and expert knowledge of driving and start a school to teach others. On February 14, 1968, with three Datsuns, a Lola T70 and a Formula Vee, The Bob Bondurant School of High Performance Driving officially opened its doors at Orange County International Raceway, near Los Angeles.

As we all know, it has grown to become one of the planet’s top driving schools, and has launched many racing careers, and brought countless competitors into SCCA competition. A couple short quotes from some slightly recognizable names that nominated Bob for this Hall of Fame induction might bring that success home:

“Bob not only was a great race car driver who excelled in multiple disciplines, but he had a vision beyond actual competition in that he created something that previously never existed, and that was his establishment of an affordable, successful high performance driving school.” - Parnelli Jones.

“The Bondurant School of High Performance Driving has, literally, trained the racing world. For his racing success and his teaching prowess, Bob Bondurant unquestionably belongs in the SCCA Hall of Fame, joining others who have made racing the great international sport it is today.”