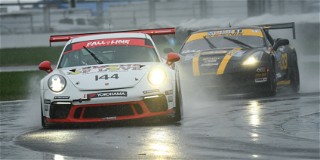 Only six cars in the 22-car field finished on the lead lap in very wet conditions, as more than a half-inch of rain fell quickly in about an hour before and during the 18-lap, 40-minute race. At the finish, Kezman and his No. 144 Fall Line Motorsports/Lemons of Love Porsche 911 GT3 Cup was an impressive 39.938 seconds ahead of Aquilante in second.

Despite the margin of victory, the win didn’t come easy or uneventfully for Kezman and his first championship. Kezman fought with teammate Mark Boden and Aquilante on the opening laps to take the lead before a third lap caution — impressively the only one of the race — put the field behind the pace car for three laps.

When the race returned to green, Aquilante roared down the backstretch to move his No. 33 Phoenix Performance/Hoosier/Hawk Chevrolet Corvette around Kezman and the two went to work. Kezman tried to return the favor in the same corner a lap later, but found a deep puddle under braking and the car snapped around, conceding the lead to Aquilante.

The pair had built a big enough lead in the conditions that Kezman remained in second, just as Aquilante retained the lead after spinning on lap 11.

By lap 13, however, Kezman had his sea legs and was charging hard. He turned the quickest lap of the race on that lap, and drove by Aquilante for the lead in the exact same corner he had previously spun. Once in front, Kezman continued to be the quickest car on track and marched ahead to the victory.

The win was the first for Kezman at the Runoffs. It also gives Kezman the SCCA Super Sweep, the most difficult title for an SCCA driver. To earn the award, a driver must win the Runoffs, a Hoosier Super Tour point title, and a U.S. Majors Tour Conference championship, all in the same class in the same season.

“It feels really good,” Kezman said. “In the rain in my mind, Mark Boden is the guy, but Andrew is right there. To beat Andrew, and spin, and run him down… I look up to this guy. He’s got a lot of experience. We talked before the race, and I didn’t want the wet. The last time I raced in the wet was probably three years ago. But that’s why you run the race, you gotta go when you gotta go. My guys put a good setup on for me. Obviously, the Porsche is the car you want in the wet, but if you put a bad setup, it’s not any better than a regular car. It was very rewarding to get one here at Indy, to beat Andrew. Wet, dry, whatever, it feels good.”

Aquilante nearly pulled off track due to the conditions but stuck it out for his 15th career podium.

“Bringing the car back in one piece in those conditions is a victory,” Aquilante said. “That was wild. I seriously contemplated pulling off at the yellow because this was not worth totaling the car or totaling half the field. On the start I probably crashed four times without crashing. I played around with some lines under the yellow flag and Tim didn’t pick up on it. I used that to get up close to him and used a lapper to get by him coming out of 10. It was amazing that we didn’t all wad it up then.

“As soon as he caught me (after the spin), I knew he had a few seconds on me. I asked what the gap was to the cars behind me and it was like a minute. I just said congratulations, Tim, and made sure I brought it home in one piece.”

The drive of the day came from Oakes, who had never previously raced in the rain. By the finish, his No. 11 Droneworks Chevrolet Corvette was the quickest car on track, moving from seventh to third in the final three laps. It was the first podium finish for Oakes, who also ran the Trans Am SGT class championship this season.

“I literally came here to race these guys and I’m bummed that we had to do it such crazy conditions,” Oakes said. “I’m looking forward to coming back and having something a little bit easier to manage. I’m also a little bummed that I didn’t get to mix it up with either of them. But I’m just grateful that I finished the damn race. For the first time in my relatively small driving career, I felt like quitting in the middle of the race because it was so intense. I couldn’t see anything. I spun on the out lap, but it was my first time on rain tires. It wasn’t until the final five laps that I got a feel for what driving on a rain tire in the rain is like, and it came to me really fast and I started running everyone down.”

Boden and Lou Gigliotti completed the top five. Andrew Wright drove his Sunbeam Tiger from 17th on the grid to 11th to earn the Sunoco Hard Charger award.