Daughtery Claims the Checker in B-Spec 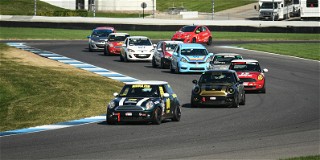 With provisional race results in, Rock Hill, SC, native David Daughtery claims his 11th career victory in the SCCA National Championship Runoffs. That tally puts him third all-time in the 58-year history of the Pinnacle of American Amateur Motorsports.

Daughtery assumed the lead from teammate Phillips on the third of the 19 scheduled laps in what Phillips said was a planned move worked out via radio communication. It appeared to pay off when the duo was able to edge away from Introne, who started on the front row alongside Phillips but dropped to sixth place when he was pushed off the track on the opening lap.

Introne quickly moved back up to third, but he lost the draft of Daughtery and Phillips, who remained in close company as they pulled away.

Phillips believed his car was faster in the sequence of corners that leads onto the back straight of the course. He planned to make his move on the final lap, but the yellow flag flew before that was possible.

Daughtery was genuinely surprised by his most recent Runoffs win and said he thought he had a third- or fourth-place car.

“I’ve got to keep up with Mr. Heinricy, because he keeps clicking them off!” Daughtery noted. “So, I’ll take this one. It certainly didn’t go as planned; I had planned on sitting back. John let me by, and we were a little bit quicker out front. He had more speed at the end of the straight, but I had him up to the checkered flag. It’s just unbelievable.”

Phillips, the 2019 SCCA B-Spec National Champion, earned his fifth podium finish at the Runoffs. “We knew exactly what we needed to do when we came to the Runoffs this year. It was just as we had planned,” Phillips remarked. “Unfortunately, I was setting [Daughtery] up for the last lap and I had him covered, but the caution came out. But no better person in the world to win than David Daughtery. He’s like a brother to me and he built this car.”

Introne was delighted to earn a trip to the famed Victory Circle at Indianapolis Motor Speedway. “It’s awesome to be on the Runoffs podium,” he said. “We’ve been in SCCA families all our lives, and you dream about this stuff. That was just a good damn race.”

David Rosenblum claimed the Sunoco Hard Charger Award in the #44 Ford Fiesta by gaining 17 positions to finish 31st in the 61-car field after starting 48th.