6 Things to Do INSIDE the Indianapolis Motor Speedway 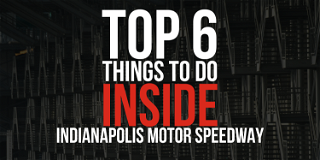 The SCCA is back at the Indianapolis Motor Speedway, and when 58 years of SCCA National Championship Runoffs meets 113 years of Speedway history, there are a lot of great things to make sure you take in during the week – many of them not available at any other time. Here are six things you don’t want to miss from inside the Racing Capital of the World.

First opened in 1956 at a small facility just outside the track, the current building was opened in 1976 and houses a selection of 25 Indy 500 winning cars and significant examples from Automotive history, including the 1954 Mercedes W196 closed wheel Formula 1 car (yep that happened), a Ferrari 375 Formula 1 car that ran the Indy 500 when it was a Formula One Race (yep, that happened) a NASCAR stock car, a Land Speed Record car and a current special exhibit featuring four-time Indy 500 winner, Rick Mears.

Walk down each row of cars and see automotive and racing history evolve before your eyes. When you leave, make sure you take a chance to visit each of the two large gift shops to take home the souvenir of your choice.

Note: The museum will close at 1pm on Thursday Sept. 30 and re-open 9 am Sunday Oct. 3. If you miss the gift shop in the museum, there will be a mobile gift shop on the midway each day.

The “Pagoda Plaza” is the common area just behind the world-famous 153-foot-tall Pagoda located at the start/finish line. This area has food, tables, shady spots, and video boards. And, you'll find that the famous “Yard of Bricks” extends from the track through the plaza, giving visitors a chance to take phots and experience what the surface of the speedway was like for its formative years.

If you’re looking for a central location to take a break, this is the spot.

3) Watch a sunrise or sunset from inside the track

The gates for the Indy 500 open at 6 am (signaled by a the sound of a cannon going off), so only a few of the earliest fans and those who work at the Speedway get a chance to see a sunrise at the famous track. If you’re on the driver/crew list for the Runoffs, this opportunity can also be yours — and it's one not many can claim.

Not an early riser? We have good news. While most fans are long gone by the time the sun sets on race day (thanks in part to a good local interstate system and police departments with more than a century of traffic management experience following races) you can hang around a little longer and watch a sunset at the Speedway.

Gasoline Alley is the name given to the main garage area of the Speedway, and it's where IndyCar, NASCAR and — for the Runoffs — many SCCA teams will spend their events, prepping their cars for hopeful moments of glory.

The name came about in the 1920s and, like the track, Gasoline Alley has had it’s share of history. It started as wooden garages with thick wooden doors. Much of it was rebuilt after a 1941 race-morning fire, and in 1986 the ultra-modern steel-and-concrete versions you'll see today were opened.

5) Listen to the grandstands at night

Like the sunrise or sunset, there is another experience you could enjoy at the SCCA National Championship Runoffs that not many get. A walk through the Speedway grounds in quiet, you'll hear the cavorting of the ghosts of the Speedway. Ok, so maybe it's just the massive tons of metal that make up the nearly 250,000 permanent seats cooling on a midwestern fall evening but, in the dark, you’ll wonder which it really is.

6) Soak up the history

Many are awestruck when they visit the Speedway, so we suggest that you just take a little time to stand there and look around the land that was the Pressley Farm in 1907, but instead of crops, has fertilized dreams, reaped effort, grown memories, and produced motorsports history.

Standing on the front straight you can see the yard of bricks which was the second surface of the Speedway, look down into Turn 1 (called the “Toughest Turn in Motorsports), see the world-famous scoring pylon, take in the straight where so much history has taken place, and where the dreams of SCCA racers are realized when racing at Indy.

Standing on the steps of the Speedway Museum you can see the short chute where Mario Andretti dodged a spinning Danny Sullivan in 1985, and where Tom Sneva walked away from a horrifying Turn 2 crash in 1975.

Along the back stretch and into Turn 3 you can see where many race-winning passes have been set up, and the spot of the wheel-banging incident between Emerson Fittipaldi and Al Unser Jr in 1989.

At Turn 4, you can feel the energy from the anticipation of race starts, where Sam Hornish Jr. set up his last-lap race-winning pass of Marco Andretti in 2006, and the agony and elation as J.R. Hildebrand crashed, handing Dan Wheldon the 2011 500 win.

While those are our top six picks, the truth is that everywhere inside the track seeps with history. You can’t stand in any spot without being in close proximity to locations of anticipation, elation, anguish, exuberance and triumph from the blood, sweat and tears of the Indianapolis 500 and 113 years of automotive and motorsports history.