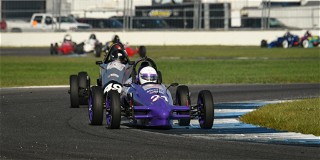 Formula Vee is a family. A lot of classes, groups, and even the Club say that often. But with eight different actual families entered at the SCCA National Championship Runoffs, well, they take the cake.

Father and son Mark and Brian Farnham; dad Ron Whitston and sons Andrew, Zachary and Steve; father and son David and Alex Scaler; the brothers’ Abbott, Andrew and Brandon; a father and son team of Joseph Bertolucci and Alexander Bertolucci; brothers Jeff Filipowski and Chris Caruso (and their story is one of legend, here); and Bill and Brian Styczynski. For those that lost count, that’s 16 of 51 Formula Vee drivers who share Thanksgiving dinner with a competitor! There could be more – the Posners, Lougheads, Jennerjahns and Barrons all have family members who race throughout the regular season in Formula Vee.

And that’s not a coincidence, for multiple reasons. First is the obvious – SCCA is a family sport which is reflected throughout the Runoffs entry list. And it’s fair to say that if the family racing budget is split into half or more, Formula Vee is still a relatively affordable place to land (if for nothing but the basics – a pair of Formula Vees need a smaller trailer than, say, a pair of Corvettes).

Not to mention, in a class that depends on the draft and running inches apart, it’s nice to have someone you trust implicitly to be your partner.

For the Styczynski family, the journey to Formula Vee is one of opportunity, a little bit of jealousy, and a chance to win bragging rights over your closest family members. In other words, it’s the American dream.

“I knew little about FV except it was an open wheel formula car in a competitive class,” he said. “I loved watching Indy Cars and I knew it was the closest thing I would ever get to driving one.”

That last detail is the important one. After racing Formula Vee against his brother beginning in the 1980s, 2017 brought an opportunity to race his open-wheel car at the Indianapolis Motor Speedway – in some ways fulfilling the dream.

That experience also opened up a second dream, though. Bill’s son Brian, 34 at the time of the Indy Runoffs, had a revelation himself.

“I was at the 2017 Runoffs at Indy, watching from the bleachers, enjoying the weekend, but thinking ‘why am I up here and not out there?’” Brian said. “I have been watching FV for 30 something years, I know all of those guys and I should be out there. So that winter I got all of my safety gear and jumped in a vintage Formula Vee my uncle left in the Midwest when he moved to Arizona.”

Three years into vintage racing a Formula Vee, Brian had a second revelation.

“I raced vintage Formula Vee for three years and then realized, while attending last year’s Runoffs, oh no, I am going to be sitting in the stands at Indy again!”

So how to solve that problem? Before vintage racing, the only other time that Brian had been in a Formula Vee was as a 24 year old, before life circumstances allowed him to go racing. Luckily, that old Citation was still sitting in a trailer, just waiting for… well, now.

Brian pulled the car into his garage, freshened up some bodywork, and went to work running SCCA Majors for the first time this season. And he’s already learned a valuable lesson – why Formula Vee drivers tend to stick around for years.

“[Formula Vee] is by far the most affordable open wheel class, it can be prepped by someone with minimal skill and storage space,” Brian explains. “It also really helps to have family members that have extra cars, extra trailer space, extra parts, car specific knowledge, etc.

“I don't really think I would want to race anything else though. Like many others I have spent my entire life around the FV and the families that come with those cars. Most of my childhood memories are from a racetrack or race weekend. I grew up watching all the FV drivers hanging out off the track, I had always wanted to be a part of that club. Now, I bring my young children to the track to watch me race.”

Which, not coincidentally, is why Bill continues to race.

“What is so great about Formula Vee is that it is a very friendly and helpful group,” Bill said. “Fellow racers will help you figure out what’s wrong with your car and how to make it go faster. Formula Vee drivers will do anything to see their fellow competitor back on the track.

“A great example was the 2005 Runoffs at Mid-Ohio when my car was nearly totaled in qualifying. Throughout the night, various competitors and their crew came by to help put my car back together. Everything from welding to fiberglass, suspension pieces and brake lines. It was an amazing testament to the tight knit Formula Vee community. At no time have I wanted to switch to another class because FV has been so much fun, on and off the track.”

That’s true even when things don’t go as well as hoped.

“I have watched my dad be happy for another guy to get a win in a big race, and be upset with a guy shortly after a race but joking around with that driver later in the night,” Brian said. “I have seen parts shared to get people out on track, or advice given to get people faster. We all want to win, but we all want to have as many competitive cars out there as we can. We want to have fun and racing is what makes us happy. I guess I think racing a FV and being part of the community is really special.”

Let’s not kid ourselves, though – the real point is competition. Bill’s 14th-place finish in 2017 at Indianapolis started the bug for Brian, but he’s been hearing about the intramural race within a race for years.

I mean, who doesn’t want to have one over on a close family member, when it’s healthy for everyone? Enter the Styczynski Cup, which began with his brother and continues to this day.

“As much as I love racing with fellow competitors, the best of times were racing against my brother and now with my son,” Bill said. “It brings the personal competition to another level. Back in 1986 we established the Styczynski Challenge Cup, for whoever had the best season in head-to-head competition. This year, the Cup will go to Brian or I, depending on who finishes best at this year’s Runoffs. The Cup will be presented at Indy after the race.”

Keep an eye on that race within a race – and see if Brian can claim the crown from Bill!