Must See, Must Drive: B-Spec Has Matured 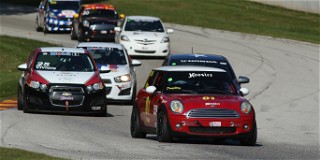 As registration for the SCCA National Championship Runoffs opened in mid-July, there were absolutely no surprises that the top three classes were Spec Miata, Spec Racer Ford and B-Spec.

Hold up – B-Spec? It’s true. One week into registration and 55 cars are signed up and ready to roll at Indianapolis.

We can debate if it’s Nature vs. Nurture that has attracted this group of racers to the class, but the B-Spec competitors have built a community that functions much the same way those little hatchbacks do – building momentum, corner after corner, in ways that only the boldest dared to dream about when the concept was announced by Honda and Mazda in December of 2010.

With more than 50 cars on the track at Indianapolis, we expect the action to be truly intense. But how did we get here? And what would it take to join the fun?

Originally announced as a universal platform that would provide a common rule set for affordable amateur and professional racing, the concept took some time to pick up steam. In theory, the same car could enter an SCCA Club race, a then-Grand-Am race, and a World Challenge race in three consecutive weekends without any changes. And though well-meaning, there were enough little changes for each sanctioning body that it never quite worked that way. Grand-Am shut down B-Spec after just one season; World Challenge lasted until 2017.

But right around 2018, the car counts started to grow. The reasons were multiple. First, let’s not forget that, when the concept was announced, there were no B-Spec race cars. Each and every one had to be built. Secondly, the street cars that these were based on – originally the Honda Fit and the Mazda2 – were released as 2007 and 2010 model years, respectively. That means that, not only did the race cars not exist, but the ones that did had to be built from essentially brand new cars. That’s a tough ask for a class that should be budget-friendly.

But now that the cars – the Honda Fit, Mini Cooper, Mazda2, Chevrolet Sonic, Ford Fiesta and Toyota Yaris are all on the entry list – have some age behind them, there is a used car market.

That, in turn, has brought the cost to own a race car down (though with the recent popularity comes a comparable price increase on the market). According to one B-Spec competitor-centric Facebook page, many of the existing cars that have hit the market recently sold in less than 24 hours and over asking price – but for the most part, still under $15,000 and ready to race. For those with the skill set, a donor car, cage and suspension kit can be had for closer to $11,000, and along with a few weeks of labor will result in a competitive car.

So certainly cost is one factor – but it’s not just the initial build that’s budget-friendly. It’s not unusual to walk through an SCCA paddock and see a B-Spec competitor lounging in a lawn chair while a fellow Production or Touring car racer scrambles in the paddock next door. The reason for that is simple – most everything is stock. There aren’t many changes to be made; the cars are easy on tires; and the pieces remain reliable through an event.

The racing itself is driver friendly. There is no such thing as a B-Spec car motoring past other competitors, so it comes down to driver skill. How much speed can you carry through the corners? That makes a difference at the end of the straightaway in any class, but in B-Spec it’s significant. How do you make a pass without killing your momentum by going too deep on the brakes? Driver skill matters.

That’s especially true after the past couple of years. More B-Spec cars have carried SCCA data boxes during races than any other class, and that data has been used to be sure cars are as equal as possible. Some will still have favorites, of course, and different tracks always lend to different characteristics. But gone are the days where there was “one car to have” in the class – or, more specifically, that there was a car or two NOT to have.

Most importantly, all of those factors led to a bit of an initial cult following in the class. Those enthusiasts spread the gospel of the hatchback far and wide, helping new racers get a license and recruiting frustrated racers out of their class and into B-Spec.

Take a look at this year’s entry list. David Daughtery is a ten-time National Champion, with seven of those in the old Showroom Stock classes. At just 17-years-old, Riley Salyer proved at Road America that the class isn’t just for those veterans. Chris Haldeman has dumped his Spec Miata aside (ok, he’s still racing that, too) for B-Spec at this year’s Runoffs. And that’s just three contenders – setting aside for a minute Kyle Keenan and John Phillips, who also have National Championships in the class, among others.

So is this the SCCA road racing class for you? Well, absolutely – it’s a class for everyone, which is what makes it so special. That’s a given.

But is this the class for you to watch at the Runoffs at Indianapolis in October? At the end of the day, this just might be the best race of the entire weekend. It’s anybody’s race – and the winner will have earned the gold medal.