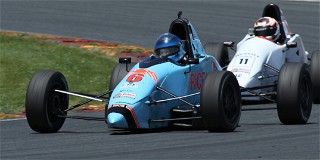 An even closer finish came to pass in the FF class. Tim Kautz and his Piper DF3D Honda led the first half of the race, followed closely by Misha Goikhberg in the No. 6 RiceRace/Hoosier/Group 6/Susi Uhl Art Mygale SJ13 racecar. Behind Goikhberg, a charging Yuven Sundaramoorthy moved from sixth to third in his Mygale F1600 sled.

With four laps remaining, Goikhberg and Sundaramoorthy moved past Kautz for the first and second positions. The two were separated by only 0.085 as the final lap began, and that margin only increased by 0.010 at the checkered flag as Goikhberg came home a winner.

At just 1,110 pounds, Goikhberg’s FF car is substantially smaller and lighter than the more than 3,000-pound GT-1 Chevrolet Camaro he finished his day in. Goikhberg, who has competed in pro events, has won previously at the June Sprints. But this year is the first time he’s run in the GT-1 field. His result Saturday was very respectable, finishing fourth in a GT-1 race won by the No. 31 Ruehlow Racing Chevrolet Corvette of Dave Ruehlow.

“Honestly, it’s much easier to switch between two cars that are such polar opposites,” Goikhberg proclaimed. “You never get confused because everything is so different. It’s an easier task than driving cars that are more similar or on the same spectrum because you can get confused.”

So which car does Goikhberg like more? The sleek FF car or giant GT-1 Camaro previously driven by Simon Gregg?

Experience vs. Youth: Jim Drago won the Spec Miata (SM) event Saturday in the No.2 East Street Racing/G-Loc Brakes Mazda Miata. Drago has a few June Sprints wins under his belt, so it’s not surprising that he performed well again. But it was no cakewalk thanks to a few young guns in the field who ran with the lead pack.

Earlier this year, Mazda and SCCA announced a new First Gear Mazda Challenge (FGMC) created for SM competitors under 25 years old who will be automatically eligible for the special FGMC points championship if they are competing at U.S. Majors Tour Conference and Hoosier Super Tour events. Those who finish well in the standings will earn additional recognition, Hoosier tire contingencies, and a direct path to the Mazda MX-5 Cup Shootout. Within FGMC is a sub-challenge that involves only Hoosier Super Tour races. Up for grabs is one free entry into the 2021 SCCA National Championship Runoffs taking place at Indianapolis Motor Speedway later this year.

Several FGMC-eligible racers are at this weekend’s Hoosier Super Tour in Wisconsin, and a few of them ran up front during the SM race Saturday. Those racers included  Brandon Collins, Connor Zilisch, Travis Wiley and Charles Mactutus. They all finished in the top 10 Saturday, and are all in the top 20 of the FGMC standings.

“Those kids are all phenomenal,” Drago said after the race. “These guys are just really good and really talented at just 15 or 16 years old. It’s crazy.”

Another Try Tomorrow: Saturday results for Group 6 will show that Mark Boden won Touring 2 in the No. 46 Fall-Line Motorsports BMW M2,  Breton Williams won Touring 3 in the No. 52 First Wealth Financial Group Nissan 370Z, Kevin Fryer claimed victory in Touring 4 driving the No. 98 Automotive Enterprises/Hoosier Mazda MX-5, Joe Moser drove his No. 36 Hoosier/King Motorsports Honda CRX SI to victory in Super Touring Under, and the Super Touring Lite win went to David Palfenier in the No. 40 KRS/Ignoble Motorsports Mazda Miata. But there’s more to this story.

Just short of the race’s halfway point a competitor went off track at Turn 11, which is better known as The Kink, and struck the barrier. Repairs were required to the barrier, and the estimated time to complete the work was a little longer than the time remaining in the race. So, unfortunately, the race was officially ended after only a couple laps. But Group 6 has a 13-lap race Sunday, and it’s safe to say all the drivers look forward to going the distance in the second race of the weekend.

Of course, six other race groups also have 13-lap races Sunday starting at 9 a.m. Central Time. Then the June Sprints concludes with a 15-lap event for ground-pounding big bore cars. Follow all the action online with live Timing/Scoring, video and Super Tour Radio presented by Hoosier Racing Tire at www.scca.com/live.

More information about the Hoosier Racing Tire SCCA Super Tour from Road America during the WeatherTech Chicago Region June Sprints, including full results, can be found at the event webpage.