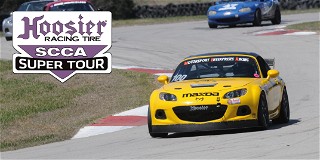 It has been two years since the Hoosier Racing Tire SCCA Super Tour has been to Hallett Motor Racing Circuit in Jennings, Oklahoma. A favorite among Sports Car Club of America road racers, COVID-19 caused the unfortunate cancelation of last year’s event on the 1.8-mile, 10-turn track nestled in the rolling Osage Hills of Northeastern Oklahoma. But the Hoosier Super Tour is back April 17-18 for its sixth competition weekend of the season hosted by SCCA’s Ark Valley Race Group made up of the NeOkla, Oklahoma and Wichita Regions.

The excitement starts 8 a.m. local time Saturday with 20-minute qualifying sessions for each of seven competition groups. Saturday afternoon then features 25-minute races for each group beginning at 12:20 p.m. Sunday morning sees a second round of 15-minute qualifying sessions starting at 8 a.m., followed by 35-minute of 27-lap races beginning at 10:30 a.m. and running right through until 5 p.m.

It’s going to be back-to-back race weekends for some Hoosier Super Tour competitors. Just a handful of days have passed since winners were crowned during an eventful Hoosier Super Tour weekend at VIRginia International Raceway (VIR). Many drivers and teams quickly packed up in Virginia and headed west nearly 1,150 miles to compete this weekend at Hallett Motor Racing Circuit located about 45 minutes outside Tulsa, Oklahoma.

Competition at Hallett commences the second half of Hoosier Super Tour’s 10-event season this year. It was Sebring International Raceway in Florida where things got started back in January. February then saw two events, one at Circuit of the Americas in Texas and the other in California at Buttonwillow Raceway Park. Michelin Raceway Road Atlanta in Georgia was the battleground for the fourth race weekend on the calendar, then there was last weekend at VIR.

After Hallett, the series is headed for an April 30-May 2 visit to Pittsburgh International Race Complex in Pennsylvania. Then it’s another trip out west to Portland International Raceway for the May 15-16 event in Oregon. The “regular” season then wraps up in June with the WeatherTech Chicago Region June Sprints at Road America in Wisconsin, followed by the June 18-19 competition at Watkins Glen International in New York.

At 1.8 miles in length, Hallett Motor Racing Circuit is one of the smaller venues visited by the Hoosier Super Tour. But the circuit is very, very popular with road racers in the region -- which explains why there are more than 175 entries for this weekend’s event. That’s a pretty good number of cars for Hallett. In fact, race organizers have asked competitors to paddock nice and tight alongside one another to ensure there is enough space for everyone competing this weekend.

Speaking of competition, certainly keep an eye on the Spec Racer Ford Gen3 class this weekend with its 40 entries. That number of cars on track at the same time will produce exciting battles throughout the field on both Saturday and Sunday. Race Group 3, consisting of Spec Miata and B-Spec competitors, should be exciting, too. Spec Miata has a field of 25 cars this weekend, and B-Spec adds another 10 cars to that race group. Both car classes have produced fantastic battles all year, and Hallett will likely continue that trend.

With around a dozen entries each, Super Touring Lite (STL) and F Production (FP) will be classes to also watch. It will be a Mazda-fest in STL fighting for victory along with the lone Honda Civic Si of Stephen Jeu. And plenty of Mazdas are to be found in FP, along with an Acura Integra, Triumph Spitfire, MGB and a couple Hondas. A couple former National Championship Runoffs winners are among the FP drivers this weekend, so some quality racecraft will likely be on exhibit.

This weekend’s Hoosier Super Tour at Hallett Motor Racing Circuit is open to spectators! Tickets are only $10 at the gate for single-day admission, or $25 for the whole weekend. There’s plenty of space to keep socially distanced while watching on-track action, but be sure to bring and wear facial covering -- especially when visiting the paddock or indoor track facilities where facial coverings are required for Sports Car Club of America events.

Can’t get to Jennings, Oklahoma this weekend? Hoosier Super Tour fans can still follow the action live, online at SCCA.com/Live or click the banner on the front of SCCA.com to access live timing and scoring, as well as live video and qualifying/race calls supplied by Hoosier Super Tour Radio. And be sure to check out the SCCA Road Racing Facebook page to watch post-race winner videos and victory podium celebrations.