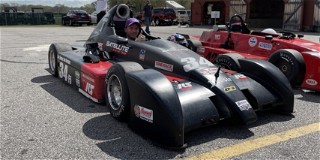 It’s no secret that the Sim Racing market has blown up in 2020 as “real life” racers turned to the virtual world to get their racing fix when the motorsports world went on hiatus during the pandemic.

But for much longer than that, the sim world has been full of racers honing their craft and waiting for an opportunity to get behind the wheel of a real life race car.

With the help of Formula 500 National Champion Clint McMahan, Ryan Mayfield is hoping to be the next racer to make that leap.

McMahan, the favorite to win every race that he’s entered in, has stepped away from his car (for the most part) this season to help out Mayfield.

As a long time sim racer, Mayfield is driving McMahan’s Satellite Racing Formula 500 with an eye on an Indianapolis podium at the Runoffs. It’s an effort on McMahan’s part to pay his success forward.

“Ryan Mayfield is going to be driving my car at Indy this year,” McMahan told SCCA.com at VIR for this weekend’s Hoosier Racing Tire SCCA Super Tour. “He’s from the simulation world, we’re going from sim to real life. We’re being sponsored by Virtual Racing School, and in coalition with Satellite Racing, we’re putting Ryan on the track. Ryan’s up and coming and is really good.”

It’s a personal challenge for Mayfield, who has been a sim racer for longer than most knew it was available.

“It’s been in the process for 11 years or so when I met Matt Strand from Satellite Racing,” Mayfield said. “It’s been his goal from the beginning to prove that sim guys can be just as good, if not better, than guys that have been doing the real thing.”

With an assist from McMahan and Virtual Racing School, the timing was right. Mayfield secured an SCCA competition license and, with some real world coaching, jumped right into the fray by hitting Hoosier Super Tours to test against the best.

“This is only my fifth race in real life and I’m still getting over my fear of death and trying to figure out how the hell this guy drives the car so fast,” Mayfield said, laughing and pointing at McMahan – the gold standard of the class.

But those early weekends – which included a runner-up to McMahan on Saturday and a third-place finish behind McMahan and yet another National Champion, Cal Stewart, on Sunday at VIR – have provided a real measuring stick for Mayfield.

“The sim stuff will get you 95 percent there every time, it’s the last five percent that gets you on the podium,” he said. “Every day we’re working on it and we’re getting faster every time.”

And truly, the sky is the limit for Mayfield and others like him, who know that their experience in the virtual world translates to the physical track with the right opportunity.

“I want to thank Virtual Racing School, they’ve made my dream come to life. I think we’ll have a good run when we get to Indy.”

And a whole host of virtual racers will be watching and cheering for their new favorite driver.