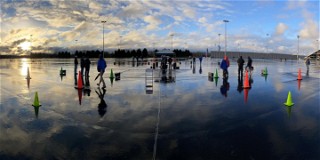 It’s never easy to talk about the things that go wrong at an event. Whether you’re a participant trying to justify mistakes or the organizers consoling the participants that weren’t given the high-quality event they signed up for, announcing failure is an important part of finding solutions. Due to a catastrophic failure in the timing and scoring system, the 2021 Tire Rack Charlotte ProSolo was ended following the second heat of competition. This allowed all but a small handful of competitors to complete eight runs on the Sam Strano-designed mirrored courses, but prevented the third heat and all Challenge competition from taking place.

First and foremost, the SCCA National Solo staff apologizes for missing the mark on this event and are already working closely with the timing and scoring provider to correct the problem for future events.

The Street 5 index class brought together a mix of hatchbacks and sedans from STH, DS and HS racing on index. Todd Kunze took the early lead representing STH and the Volkswagen crowd. Afternoon runs brought faster times for the majority of the field and Alex Piehl took the bright blue Honda Civic Type R to the lead, just 0.133 second ahead of Chris Yoder in a Civic Si. Dave Potocki cleaned up for his final pair of runs to take the third trophy while Kunze held onto the fourth and final trophy position.

The weekend’s planned CAM Challenge drew 34 drivers to the CAM Challenge with 10 trophies awarded. When the event came to a stop, the top four finishers were separated by less than three tenths of a second. At the top of the standings, Chad Englert took the class win by 0.220 second over Adam Schoonmaker and his Chevrolet Camaro. The gap narrows even further as Steve Waters was just 0.092 second back in the third position in his Corvette while Justin Peachey brought his Corvette home in fourth, just 0.026 second behind Waters. Wrapping up the top five was Jeff Cox in his Mustang GT500.

In E Street, we got to witness a rare and fun event for the Peterson family. Eric and Chris Peterson’s two daughters have been around autocross for years, but eldest daughter Kelly turned 16 last week and got her driver’s license, making her eligible for competition without a passenger. She joined Eric in the family’s Toyota MR2 and quickly came up to speed. While a trophy for Kelly wasn’t in the cards for this event, she brought good luck as Eric took the class win by 0.695 second over Buckey Maxey.

ProSolo competitors are encouraged to watch SCCA.com and SoloMatters for upcoming news concerning the results of the investigation into the timing failure in Charlotte.