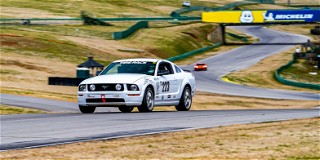 The 2021 Tire Rack SCCA Time Trials National Tour Powered by Hagerty opened its season this past weekend at VIRginia International Raceway (VIR) found along the border of North Carolina and Virginia. An absolutely amazing venue at which to begin the year, nearly 140 drivers accepted the challenge presented by the 3.27-mile circuit featuring high-speed straights, challenging turns, Uphill Esses and invigorating elevation changes.

In the Ultimate 1 (U1) class, Kyle Carrick fought early issues with his 2015 Nissan GT-R, using wonderful weather conditions Saturday as an opportunity to shake down his car and make sure everything was OK. While Carrick was fighting issues on Saturday, and feeling the effects if wrong-tire-itis during the TrackSprints, he was able to throw down the fastest lap of the event, a 1:53.103, during the Sunday afternoon TrackAttack “small sessions”. The afore mentioned issues, however, opened the door for Chris Ingle and his 2014 Dodge SRT Viper to comfortably win U1 with an overall time of 4:33.608, which included the second-fastest lap on the weekend of 1:56.747.

A really close battle between Donald Lui, in a 2015 Subaru BRZ, and James Avellina, in a 2020 Toyota Supra, came to be in the Max 2 class. Lui was atop the class after day one, but Avellina chipped away at that lead Sunday winning TrackSprint and setting a faster lap on the second day. But it just wasn’t enough as Lui produced an overall time of 4:50.383 as compared to Avellina’s 4:50.395, a difference of only 0.012-second. Perry Ellwood and his Mazda RX-8 were a blink of an eye behind in third with a time of 4:50.467.

The Sport 3 class was decided by a scant .25-seconds as Dennis Barrett and his 2002 BMW M3 got the win with a time of 5:08.789 over Brian Tyson who accumulated a time of 5:09.04 in a 2021 Hyundai Veloster. Tyson was actually leading going into Sunday, but Barrett clawed away at that time with a 0.4-second faster run in TrackSprint. Barrett then cut 1.3 seconds off his day-one lap time to pull out the win. Third went to Eric Ward in a 2019 Chevrolet Camaro with a time of 5:10.176.

Top Novice recognition went to Benjamin Smolen in his stock 2019 VW Jetta. It was his first time on track, and he ended up only one spot off the Sport 5 podium. Time Trials Champion, awarded to those who do the most to support the Time Trials program and an overall event experience, went to Greg Hunt whose co-driver was a friend who never competed at an SCCA Time Trials event before.

The award for Most Improved went to Ryan Cheek. She has been participating at Time Trials events for a while, and was really wheeling her 2006 Ford Mustang at VIR throughout the weekend. Time Trials National Tour staff noted how much Cheek has improved as a driver, and at VIR she finished only one spot off the Tuner 3 class podium.

Kevin Mongold received the Spirit of Time Trials award after having a rough Sunday, damaging his car.  Despite this, he stuck around to help and cheer on friends as they batted in their respective classes. The Crossover award, bestowed to competitors coming from other SCCA disciplines, went to Cameron Albea. The autocrosser runs his Mazda Miata in STS at SCCA Solo events, but installs a rollbar in the same car to compete at Time Trials in the Tuner 5 class, which he won this weekend at VIR.

The 2021 Tire Rack SCCA Time Trials National Tour Powered by Hagerty shifts its focus to the West Coast for the next event, taking place April 9-11, at Buttonwillow Raceway Park in California. Register for that event today!